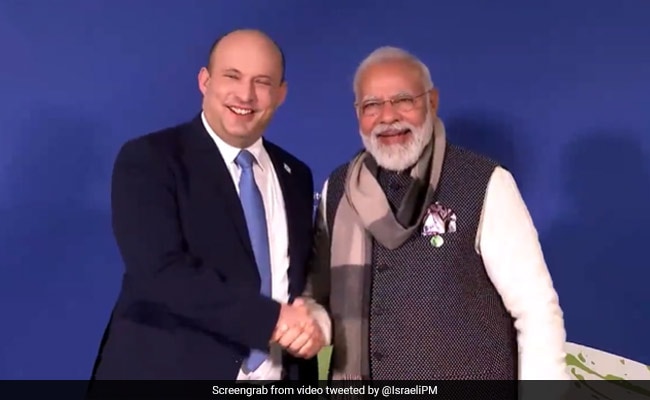 Israel Prime Minister Naftali Bennett called PM Modi “the most popular man in Israel” during an animated conversation with him on Tuesday. In a video tweeted by the Israeli leader, the two Prime Ministers were seen sharing a light moment in between their packed schedules at the COP26 climate summit in Glasgow.

Mr Bennett also invited him to “come join my party” which had PM Modi burst into laughter.

Excellent meeting with @NarendraModi at @COP26.

Narendra, I want to thank you for your historic role in shaping the ties between our countries.

The two leaders met for the first time today on the sidelines of the COP26 climate summit during which they reviewed the bilateral ties besides exchanging views about expanding cooperation in areas of high-technology and innovation. Their maiden formal meeting came after their brief interaction on Monday during the climate conference.

India shares close ties with Israel and the two countries have been working closely together for years on counter-terrorism and defence issues. The bilateral ties between the countries were elevated to a strategic partnership during the historic visit of Prime Minister Modi to Israel in 2017, making him the first Indian Prime Minister to visit Israel in the last 70 years.

Urging to carry forward the deepened cooperation between the two countries that started during his predecessor Benjamin Netanyahu, Mr Bennett, who became Prime Minister in June this year, vowed to bring the ties together to a new level.

“Indeed! We shall continue working together for stronger bilateral ties and for a better planet,” PM Modi said in a tweet.

The meeting between PM Modi and Mr Bennett comes after Foreign Minister S Jaishankar, during his visit to Israel last month, extended an invitation to the Israeli premier on behalf of PM Modi to visit India.