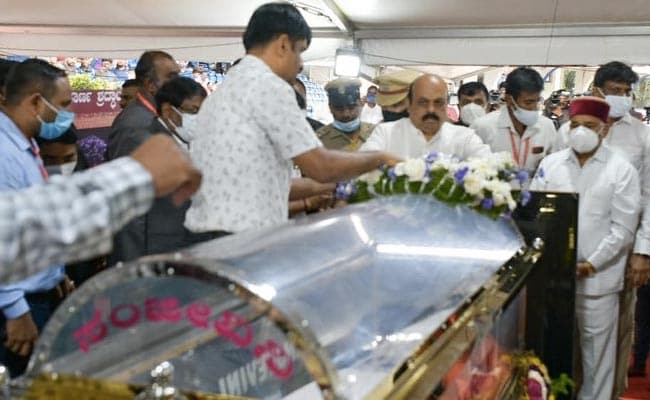 Iconic actor Puneeth Rajkumar died at a Bengaluru hospital yesterday at the age of 46 after suffering a cardiac arrest. Mr Rajkumar was admitted to the city’s Vikram Hospital at 11.30 am after complaining of chest pain; this was as the actor, a known fitness aficionado, was at the gym.

Mr Rajkumar is likely to be cremated with full state honours at 6.30 pm at the Kanteerava Stadium, where his body has been lying in state so tens of thousands of grieving fans can pay their respects.

Visuals from yesterday evening underline the level of respect and adulation he commanded; a clip showed a sea of fans, shoulder-to-shoulder and wall-to-wall, waiting to get a glimpse of his body.

“On the basis of decision taken by Puneeth Rajkumar’s family, the next stage of security arrangements will be made. The family will take a call on when the final rites will be performed. Probably, the last rites will be done today,” Bengaluru top cop Kamal Pant told news agency ANI.

The actor’s daughter is flying in from the United States to conduct the funeral rites; she is expected to land in Delhi at 1.30 pm and will be in Bengaluru by 4.15 pm.

Mr Rajkumar’s death was received with shock across the country, with Prime Minister Narendra Modi leading a long list of actors, sportspersons and political leaders united in their sorrow.

The Prime Minister lamented a “cruel twist of fate” that had robbed India of a “prolific and talented actor”. “This was no age to go. The coming generations will remember him fondly for his works and wonderful personality. Condolences to his family and admirers. Om Shanti,” PM Modi tweeted.

Chief Minister Bommai said he had been left “deeply shocked” and said the loss of the state’s favourite actor ‘Appu’, as Mr Rajkumar was fondly called, had caused enormous loss “and I pray God will have mercy on his soul and give his fans the power to endure this pain.”

Former Chief Minister and Congress leader Siddaramaiah said Mr Rajkumar had won the hearts of all Kannadigas through his acting skills, and that it was a great loss for Karnataka.

Mr Rajkumar’s death also led to tributes from the world of cricket, with Bengaluru-born India cricketers Anil Kumble and Venkatesh Prasad among those tweeting.

From cinema, legendary star Amitabh Bachchan was among those who tweeted; Mr Bachchan said: ” A day of remorse and prayer … two close to the family passed away today … it is too dark.”

Late last night it emerged that Mr Rajkumar had arranged for his eyes to be donated.