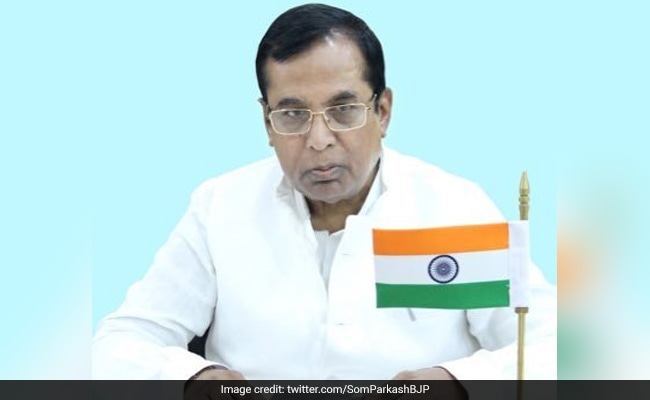 Union Minister of State for Commerce & Industry Som Parkash has said that Prime Minister Narendra Modi opened the Kartarpur Corridor keeping in mind the sentiments of the Sikh community and refuted the allegations that the government has done it targeting the upcoming assembly polls in Punjab to attract the voters impacted due to the farmers’ protest.

Speaking to ANI on Thursday, the union minister said that the step has been taken because of the people’s sentiments and wishes.

“There are people’s sentiments, wishes and faith, and the decision of opening of the corridor has been taken keeping all this in mind. As far as the elections are concerned, the Bharatiya Janata Party (BJP) has the largest number of members in the world and we will fight 117 seats and win the election comfortably,” he said.

Mr Parkash further said that he himself wrote a letter addressing the Prime Minister and the Home Minister thanking them on behalf of Punjab.

“Many people wished to visit the corridor. A delegation from Punjab including Ashwani Sharma and the chief minister has also gone today (Thursday). As far as Navjot Singh Sidhu is concerned, he has not gone today. When he gets the permission, he will go then,” the Minister told ANI.

Talking about the ongoing farmers’ protest, Mr Parkash said that the government has always tried to solve the problem and it wants the protest to end soon.

“We held 11 rounds of talks. We tried to accept every demand of the protestors. If they come with another proposal for dialogue, we are ready to have a discussion with them. We hope that the protest would end at the soonest. Just as the Kartarpur corridor has opened, likewise, the protesting farmers should return to their homes,” he said.