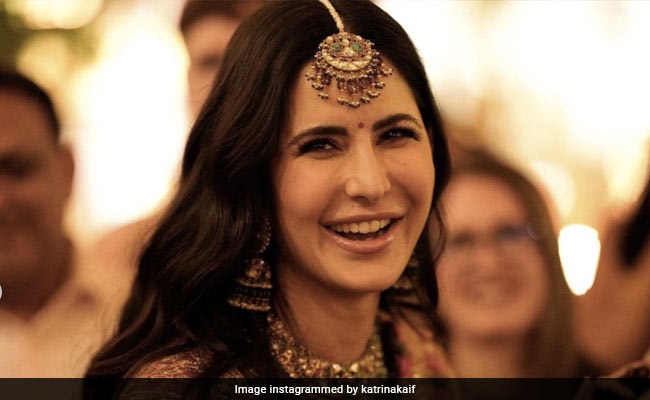 Katrina Kaif, who married actor Vicky Kaushal recently, thrilled the Internet on Sunday with a picture of her bridal mehendi – the photo shows her outstretched arms decorated with intricate henna, wedding ‘chooda’ on her wrists. The photo is taken against a backdrop of sea and sand which fans are seeing as confirmation that Katrina and Vicky went to the Maldives for their honeymoon. “So Maldives it was,” read a comment on Katrina Kaif’s post. Others busied themselves trying to find Vicky Kaushal’s name in the mehendi as is tradition. “My hopeless romantic self is trying to find Vicky ka naam on her hand,” read one comment. “So beautiful and we are looking for Vicky’s name,” read another.

The mehendi was the first of Katrina Kaif and Vicky Kaushal’s wedding festivities. Both families – the ladkiwale and the baraat – participated and a good time was clearly had by all:

Katrina Kaif and Vicky Kaushal were spotted boarding a chopper at the wedding venue – they were reportedly on their way to Jaipur airport to fly to the Maldives. The newlyweds were spotted at Mumbai airport when they returned some days later. Katrina and Vicky headed to his family home in Andheri but are moving into their own apartment in Juhu where they will be neighbours with Anushka Sharma and Virat Kohli.