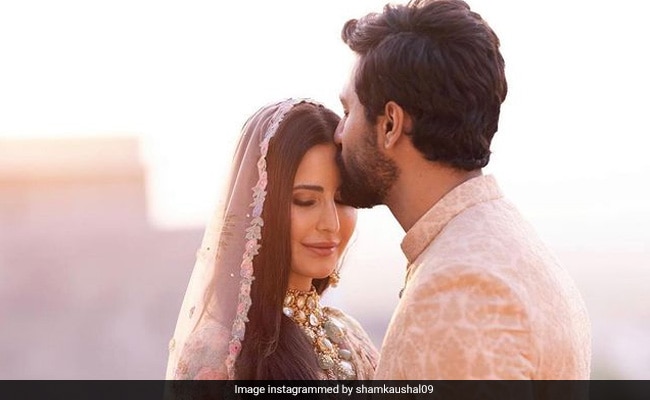 Sham Kaushal shared a picture of son Vicky Kaushal and daughter-in-law Katrina Kaif  from their engagement ceremony and he accompanied it with an equally beautiful caption. In the picture, Katrina and Vicky can be seen dressed in colour-coordinated outfits. They both wore outfits by Sabyasachi. Sham Kaushal, sharing the picture, captioned it: “A relationship full of love and respect for each other and blessed by God, parents and millions of well wishers. Gratitude. Sham Kaushal, a stunt director, worked with Katrina Kaif in the action thriller Phantom.

Sham Kaushal welcomed daughter-in-law Katrina Kaif to the family by sharing this picture and he wrote in his caption: “Shukar rab da, shukar sab da. Feeling so happy and blessed as a father. May God’s blessings be always with the newly weds. Gratitude.”

Katrina Kaif and Vicky Kaushal got married in December 9 in Sawai Madhopur, Rajasthan. The star couple reportedly started dating in 2019. Earlier this year, during Zoom’s chat show By Invite Only, actor Harsh Varrdhan Kapoor confirmed that the actors are dating and said, “Vicky and Katrina are together, that’s true. Am I going to get in trouble for saying this? I don’t know. I think they’re quite open about it.”

Back in 2018, during an episode of Karan Johar’s talk show Koffee With Karan 6, Katrina Kaif said that she would “look nice” with Vicky Kaushal on screen. Vicky Kaushal appeared to faint when he was told about Katrina’s statement during the show.