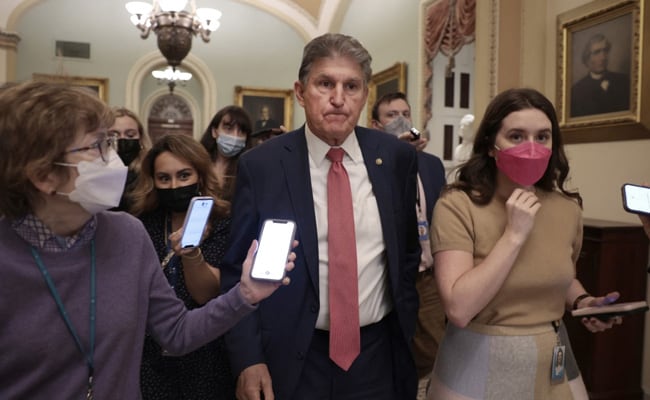 US Senator Joe Manchin dealt what seemed to be a fatal blow Sunday to President Joe Biden’s massive social spending bill, saying he could not support the legislation’s passage through the divided chamber.

The moderate Democrat’s vote is crucial to getting the $1.75 trillion Build Back Better bill through the Senate, and Biden — along with other senior Democrats — has spent weeks trying to secure his support.

“I can’t vote for it and I cannot vote to continue with this piece of legislation. I just can’t,” Manchin, a senator from the predominantly Republican state of West Virginia, said on Fox News Sunday.

“I’ve tried everything humanly possible, I can’t get there… This is a no.”

Biden has held numerous talks with Manchin, who considers the project to be too expensive and argues it will further fuel inflation, now a major concern for Biden and US consumers.

“My Democratic colleagues in Washington are determined to dramatically reshape our society in a way that leaves our country even more vulnerable to the threats we face,” Manchin said in a statement posted on Twitter.

“I cannot take that risk with a staggering debt of more than $29 trillion and inflation taxes that are real and harmful to every hard-working American.”

The bill aims to funnel funds toward lowering the cost of child care and prescription drugs, supporting the purchasing power of households and investing in the transition to clean energy.

Manchin’s decision is a major blow to Biden, who has spent significant political capital in seeking to secure the passage of what is seen as a signature bill of his presidency.

Republicans in the divided Senate solidly oppose the legislation, meaning passage depends on every Democrat in the chamber supporting it.

Biden on Thursday admitted he probably wouldn’t be able to push through the bill as quickly as he had hoped after recent tough talks with Manchin, dashing hopes of a definitive vote before the end of the year.

He maintained a note of optimism, however, saying, “I believe that we will bridge our differences and advance the Build Back Better plan, even in the face of fierce Republican opposition.”

The White House did not immediately respond to request for comment on Sunday.

Progressive Senator Bernie Sanders took a harder line responding to Manchin’s “no” on Sunday, saying Democrats would take the bill to a vote despite his intransigence.

“I hope that we will bring a strong bill to the floor of the Senate as soon as we can and let Mr. Manchin explain to the people of West Virginia why he doesn’t have the guts to stand up to powerful special interests,” he said on CNN.

The progressive wing of the Democratic party has been angered at the attention the White House has lavished on the moderate Manchin to win him over to backing the bill.