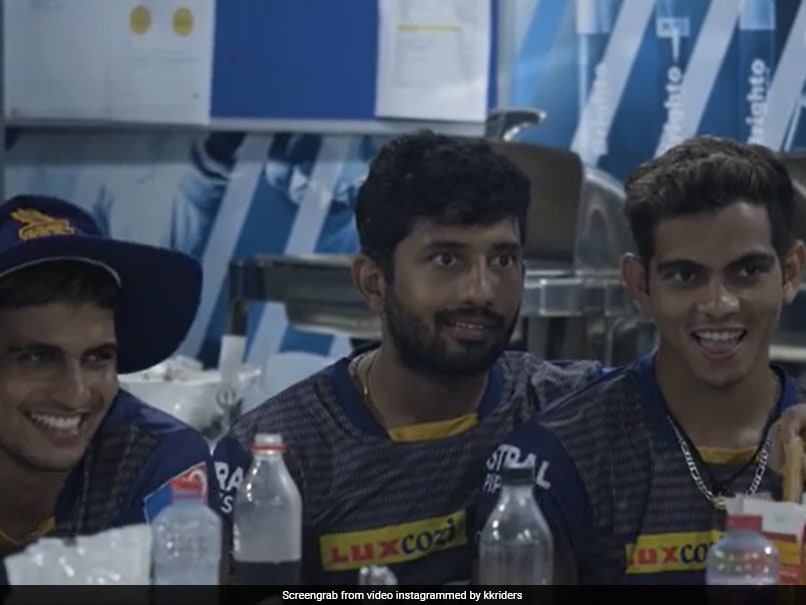 KKR players were overjoyed after their emphatic win over RCB in Abu Dhabi.© Instagram

Kolkata Knight Riders (KKR) produced a clinical display in Abu Dhabi as they outclassed Royal Challengers Bangalore (RCB) by nine wickets on Monday. After their “emphatic win” over RCB, KKR posted a video on their Instagram handle in which the team can be seen celebrating their big victory. “Dressing Room Scenes after beating RCB. Six minutes of pure love from inside the #KKR dressing room after the emphatic win vs @royalchallengersbangalore last night in Abu Dhabi COMPLETE team effort,” the video was captioned.

In the video, KKR’s head coach Brendon McCullum said that the team was able to put up a complete performance because they took on the key players from the opposition — Virat Kohli, Glenn Maxwell and AB de Villiers.

“Every team has big players in it. If we get the mentality that we’re going to take them down, look what can happen. AB de Villiers, Virat Kohli, Glenn Maxwell and today we dominated them. Okay, look what happens we’re able to put up a complete performance on them because we took on the big boys,” McCullum said in a video posted on social media by KKR.

“In the next game, we’re going to be confronted with some big players as well. That’s what I am talking about, look them in the eye and say we will take you on,” McCullum added.

In the match, KKR bowled out RCB for a paltry total of 92 in 19 overs as Varun Chakravarthy and Andre Russell picked up three wickets each while Lockie Ferguson provided Kolkata with two breakthroughs.

Chasing 93 runs to win, KKR openers put on a solid 82-run stand as the team reached the target with 10 overs to spare.