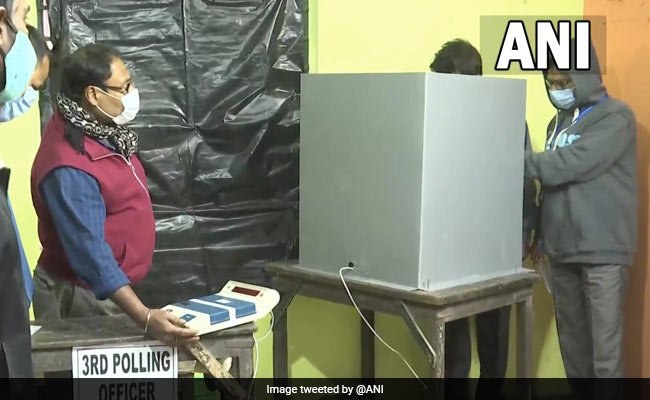 Voting began at 7 am in 4,949 polling centres across Kolkata

The Kolkata Municipal Corporation (KMC) logged a 52.17% voter turnout till 3 pm today despite incidents of violence, including cases of bombings at two poll booths.

“A total of 52.17 per cent of total votes were polled till 3 PM. Polling has by and large been peaceful barring a few incidents. Two incidents of throwing of crude bombs outside polling centres were reported,” a State Election Commission (SEC) official said.

Although the SEC claimed that only one person was injured, the police said that three people were injured. One of them has lost his leg, they said.

72 people have been arrested so far for disturbing the peace during the polling period, the police said.

Trinamool Congress’ national general secretary Abhishek Banerjee said that if any ruling party leader is found to be involved in the violence during the polls, strict action will be taken “within 24 hours”.

“We don’t support any form of violence, and strict action will be taken within 24 hours if any TMC leader is found to be stopping the process of free and fair polls. I would request the media to come out with related footage and evidence (if available),” he told reporters after casting his vote.

Bengal Governor Jagdeep Dhankhar said that his security personnel stayed outside the booth when he went in to vote, in adherence to an order of the State Election Commissioner.

He said peaceful polling with no fear in the minds of voters and the absence of interference of the state apparatus are at the heart of any election process.

“I had called Sourav Das twice and tried to impress upon him that polling should be held peacefully and without fear, and that the administration should not interfere in any manner in this,” Mr Dhankhar said.

The opposition BJP and the CPI(M) alleged that the TMC has forcibly stopped opposition booth agents from entering polling centres in several wards, a charge that the ruling party termed as “baseless”.

CPI(M) activists staged a road blockade in Bagha Jatin area alleging that their polling agents were not allowed inside the booths.

The BJP state leadership announced that it will conduct peaceful demonstrations across the state in protest against the “violence and malpractices” in the polls.

“We will stage peaceful sit-in demonstrations across the state against the ongoing violence (in the KMC polls). The way looting of votes took place with the active help of state administration is shameful for our democracy. This is the reason we had asked for central forces to ensure free and fair polls,” BJP state spokesperson Shamik Bhattacharya said.

“The BJP knows they will face defeat in the elections. So, they are now making such excuses. The elections have been very peaceful, barring few small incidents,” he said.

BJP’s sitting councillor of Ward No 22 and former deputy mayor of Kolkata Mina Devi Purohit alleged that she was attacked by TMC activists, an allegation that the ruling party denied.

Congress has also alleged the TMC brought in fake voters and a scuffle ensured between workers of both the parties at one of the wards.

The grand old party alleged that Amitabha Chakraborti, the election agent of Congress councillor Santosh Pathak, was beaten by TMC activists inside the booth.

Clashes were reported between TMC and Congress activists inside one of the booths. The police later brought the situation under control.

The TMC, during the run-up to the KMC polls, had warned party candidates against using force during the civic polls, and said that those found to be involved in violence would be thrown out of the party.

Voting began at 7 am in 4,949 polling centres with strict adherence to Covid protocols and tight security. Polls closed at 5 pm, officials said.

40,48,357 voters are eligible to exercise their franchise to seal the fate of 950 candidates in the fray.

23,500 Kolkata Police personnel have been deployed across the city, and route marches and area domination exercises were conducted in various parts of the metropolis, an officer of the force said, adding, more than 200 police pickets have also been set up at crucial points across the city.

The ruling Trinamool Congress is fighting to retain the civic board for the third consecutive term, while the BJP will contest CPI(M) to secure the second position. The TMC had swept all the 16 Assembly segments in the metropolis in this year’s Assembly elections.

The counting of votes will take place on December 21.