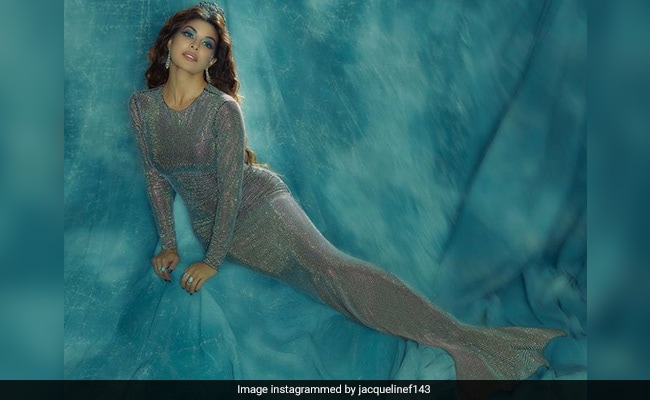 Halloween is that time of the year when vanity takes a backseat and creativity rushes to the forefront. And, while not all of us can look good in our Halloween costumes, you can always trust Jacqueline Fernandez to deliver. This year, the actress sent a million hearts fluttering when she chose to dress up as a mermaid queen for the festival. In a gown that featured a classic mermaid fin at the end, the actress looks at ease in her costume. Being her stunning gorgeous self, the actress had no problem impressing fans with her choice of outfit. And, she had the perfect Halloween message for her fans. In the caption, Jacqueline Fernandez wrote, “Happy Halloween everyone. I hope you stay your craziest, weirdest self,” with a host of pumpkin and ghost emojis.

A few days ago, the actress proved to us that she is just as attached to her favourite outfits as the rest of us. In fact, Jacqueline Fernandez is seen wearing a torn top that she refused to throw away. This was abundantly clear from her caption that said, “Torn but not damaged.” Making goofy faces and smiling for the camera, Jacqueline Fernandez is as charming as ever.

In addition to her personal life, the actress’ Instagram timeline provides fans with professional updates. And, despite all the success that has come her way, Jacqueline Fernandez never forgets to acknowledge her team’s efforts. A few days ago, she shared a photo of herself prepping for a shoot. In the behind-the-scenes image, the star’s team can be seen fixing her outfit. In the caption, she wrote, “The awesomest Manisha Melwani, Sanya Kapoor, Shaan Muttathil literally stitching the outfit on me.”

On another occasion, Jacqueline Fernandez also shared a photo of herself dubbing for her upcoming film Attack. Sharing the image, she wrote, “The many moods of dubbing…”

Jacqueline Fernandez has appeared in several successful films such as Murder 2, Race 2, Housefull 2, Housefull 3, Judwaa 2, and Mrs Serial Killer. She will soon be seen in Bachchan Pandey, Ram Setu, Attack and Cirkus.