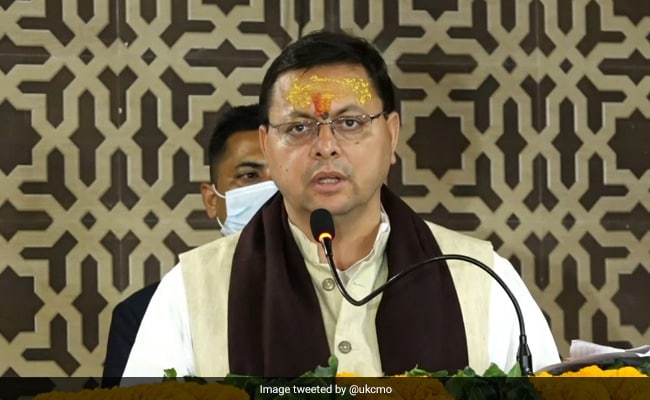 Using cricket terminologies, Defence Minister Singh sought a full five-year term for Mr Dhami in poll-bound Uttarakhand after the 2022 assembly elections, likening his short tenure in the fag-end of the state assembly to a T-20 match.

Hailing Mr Dhami’s performance as the chief minister in just over four months, Mr Singh made the recommendation for him while launching the second leg of the Shaheed Samman Yatra from a martyrs village in the district.

“I was amazed when Dhami announced that he has made 400 decisions in just around four months of his tenure. I have myself been a chief minister. Four hundred decisions in four months is not an ordinary feat,” said Rajnath Singh.

Praising the chief minister for raising salaries of teachers, Asha and Anganwadi volunteers and gram pradhans, the Union Minister said “he is young, polite and a man of action, capable of taking decisions and implementing them”.

“Dhami is doing a relentless (tabartor) batting in a 20-20 match. He is performing as a good finisher like the famous Mahendra Singh Dhoni. He must be given a chance to play a full-length five-year test match,” Mr Singh said drawing an analogy from cricket to praise the chief minister who took over in July this year.

Assembly elections are due in Uttarakhand early next year.

Wishing Mr Dhami “all the best”, Mr Singh said he would continue to work for the welfare of all sections of society with the same sensitivity as he is doing at present.