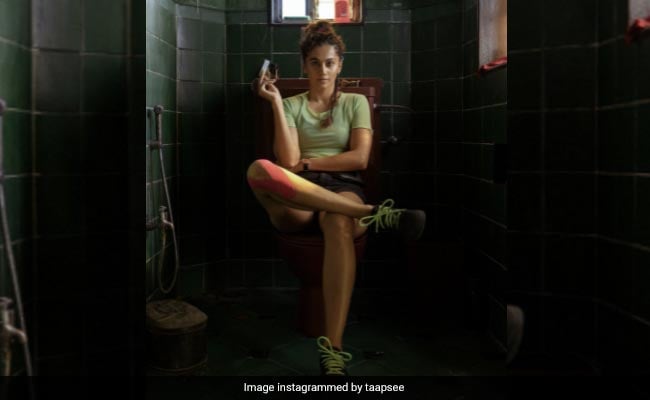 Taapsee Pannu who is known for her fearless acting has now dropped the teaser of her upcoming film, Looop Lapeta. This film is a Bollywood remake of the German film Run Lola Run. Sharing the teaser on her Instagram Taapsee Pannu wrote, “Time is ticking, and it is time to run! Can’t wait for all of you to see the film! #LooopLapeta, A Sony Pictures Films India Feature and Ellipsis Entertainment Production, directed by Aakash Bhatia, coming soon, only on Netflix.” The teaser also hints at Taapsee Pannu, who can be seen running against time, and has an encounter with Tahir Raj Bhasin.

Recently, Taapsee Pannu also shared her first look from the film on her Instagram, where she can be seen playing the role of “Savi”. She was seen sitting in a dark and dingy toilet, holding a piece of paper in her hand. She also has a red brace on her right knee. Sharing the photo, Taapsee Pannu wrote: “Life mein kabhi kabhaar aisa time aata hai jab humein khud se yeh sawaal karna padta hai (In life, there comes a time when we have to ask ourselves a question) ‘How did I end up here?’ main bhi yahi soch rahi thi (I was thinking about that too). No, not the s**t pot, but the s**t life! Hi, this is Savi and welcome on board a crazy ride.”

See the first look of the film here:

Looop Lapeta will be released on Netflix and it stars Tahir Raj Bhasin and Shreya Dhanwanthary opposite Taapsee Pannu. The film is directed by Aakash Bhatia. It was originally scheduled to be released in January 2021, but it was postponed due to the pandemic.