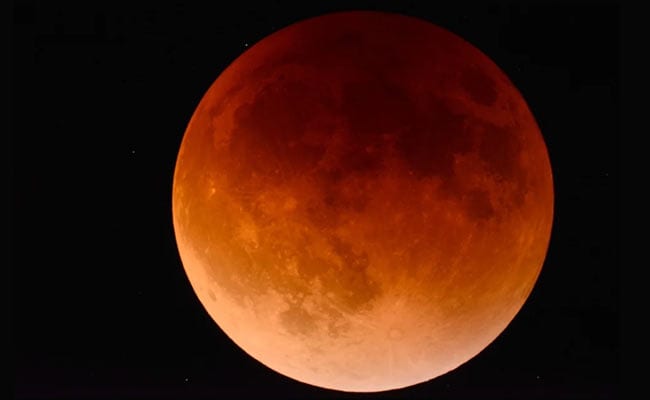 A lunar eclipse takes place when the Earth comes between the Sun and the Moon.

The last lunar eclipse of 2021 will happen on November 19. This would be a rare celestial event as the eclipse will be the longest in more than 500 years. It will be visible from many parts of the world, including some areas in India. This will be a partial lunar eclipse and the Moon is likely to appear blood-red. An eclipse happens when the Sun, the Moon, and the Earth come in an imaginary straight line obstructing the Sun’s rays from reaching either the Moon or the Earth.

A lunar eclipse takes place when the Earth comes between the Sun and the Moon.

The lunar eclipse will take place on November 19. It will start at 12:48 pm IST and end at 4:17 pm. The eclipse will peak around 2:34 pm when 97 percent of the Moon will be shadowed. Then the shadow will begin to disperse and in India, it will be visible till 4:17 pm.

Where Will The Lunar Eclipse Be Visible?

The lunar eclipse will be visible completely in North and South America. In India, people will get to see only a glimpse of the final moments of the event. It will be mostly visible in northeast India, including Arunachal Pradesh and Assam. The penumbral eclipse will be visible briefly in parts of Uttar Pradesh, Bihar, Jharkhand, West Bengal, and Odisha.

How To Watch The Eclipse?

If you are in northeast India, you can watch the eclipse without any special equipment. People in the rest of the country can watch the event in any of the live streaming channels on YouTube, including timeanddate.com.

According to NASA, this is the longest partial lunar eclipse of the century and will last for a duration of 3 hours, 28 minutes, and 23 seconds.