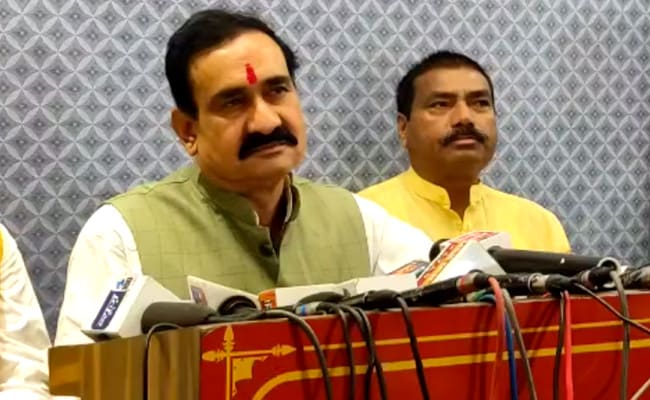 Madhya Pradesh Home Minister Narottam Mishra has hit back at Congress leader Digvijaya Singh over his invitation to stand-up comics Kunal Kamra and Munawar Faruqui – who have faced cancellation of shows across the country after pressure from the ruling BJP and right-wing groups.

Mishra – who, over the past months has warned of bans and police cases against a growing list of “objectionable” audio-visual and literary content – issued his latest threat Tuesday, telling Mr Kamra and Mr Faruqui they will be jailed if they performed a show “insulting Hindu gods and goddesses”.

“If someone holds a show insulting Hindu gods and goddesses, then his place would be only jail. Under no circumstances will anyone be allowed to insult anybody’s religious feelings,” Mishra said.

“If Digvijaya Singh ji wants to hold a comedy show, why doesn’t he call Rahul Gandhi?” he asked.

The Home Minister’s dire warnings wasn’t the only one.

A BJP MLA attacked Digvijaya Singh over the invitation; “(he)… is wishing to invite Pakistan’s terrorists to his home for a biryani party. This doesn’t mean that we all will accept it,” Rameshwar Sharma, the lawmaker from the Bhopal Huzur constituency, said.

On Monday, Mr Singh, a former Madhya Pradesh Chief Minister, tweeted: “I will organise a show for Kunal and Munawar in Bhopal. All responsibility will be mine.”

He suggested himself as the subject of the show and said: “Sanghis (RSS cadre) should not object to this!! Don’t be afraid!! Give the date and time as per your convenience.”

Responding to Mr Singh’s appeal, Mr Kamra tweeted, “Sir thank you for the kind invitation. Checking if we have life insurance and getting back to you ASAP”.

Both Kamal Kamra and Munawar Faruqui have been either refused permission to hold their shows or, having been given permission and sold tickets, then had organisers bullied into cancelling them.

Last week Mr Faruqui was dropped from a show in Haryana’s Gurgaon after organisers said they received threatening calls; this was as a BJP leader, Arun Yadav, tweeted: “We will not allow this traitor’s show… under any circumstances”.

In November Mr Faruqui’s show in Karnataka, another BJP-ruled state, was cancelled after police cited “law and order problems”.

A disheartened Mr Faruqui – who was arrested in January and spent over a month in jail for allegedly insulting Hindu deities during a show in Madhya Pradesh’s Indore – said he was quitting.

Mr Kamra also faced cancelled shows in Karnataka. He tweeted a sarcastic swipe at those behind the cancellations, saying: “I suppose I am seen as a variant of the virus now.”