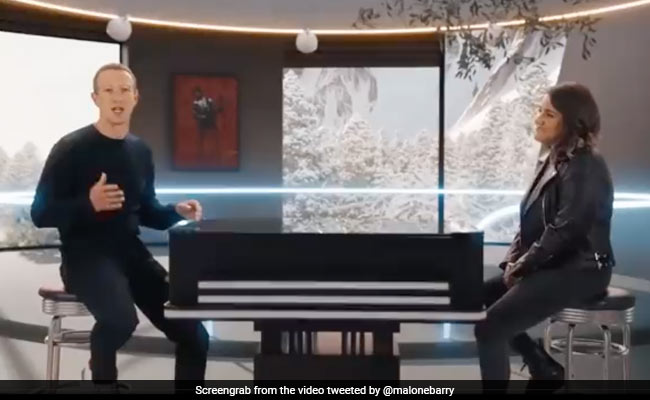 Facebook’s parent company will now be known as Meta

Since Mark Zuckerberg announced the name change of Facebook’s parent company to Meta, he has been busy explaining the reasons for the new name. In a new video, Mr Zuckerberg discusses with a member of his studios team the “exciting” games that are lined up for Meta Quest. The chat session though has attracted attention for, mostly, the wrong reasons. Many people took a dig at the way the conversation takes place, alleging that it does appear to be scripted and heavily choreographed.

As the clip begins, Mr Zuckerberg asks his colleague to take “us through some of the exciting games lined up for Quest”. “Absolutely,” she responds, with a big smile and hands stretched out in excitement.

The video, which has collected more than 3.4 million views on Twitter, has also caught the attention of Barry Malone, a journalist based in Washington, DC. “Just two humans having a perfectly natural conversation,” he said, tongue firmly in cheek.

Several others too joined him in having a go at the “bizarrely demonstrative” video.

“I think there must be a hand gesture coach specially hired and paid a fortune to train staff at Facebook,” a user wrote.

Another one asked if Mr Zuckerberg’s colleague in the video was doing sign language or “being bizarrely demonstrative”. The user wrote that the Facebook boss himself was wearing a hairstyle that looked like “something out of Star Trek”.

Is the girl doing sign language or just being bizarrely demonstrative? Zuckerburg’s hair is like something out of Star Trek. Bananas interaction.

This person wrote, “She’s gesturing as though she will be fired if she forgets the choreography”.

Check some more reactions to the video below.

it would had been more fun if they were standing up pic.twitter.com/tbHLBscGRp

On Thursday, Mark Zuckerberg announced that Facebook’s parent company will now be known as Meta. The rebranding exercise is aimed at reflecting the focus of the company on the metaverse, an online world where people could exist and interact in shared virtual spaces. But many people saw it as a step to move away from the criticism the social media giant is getting over privacy concerns of users and its business model.