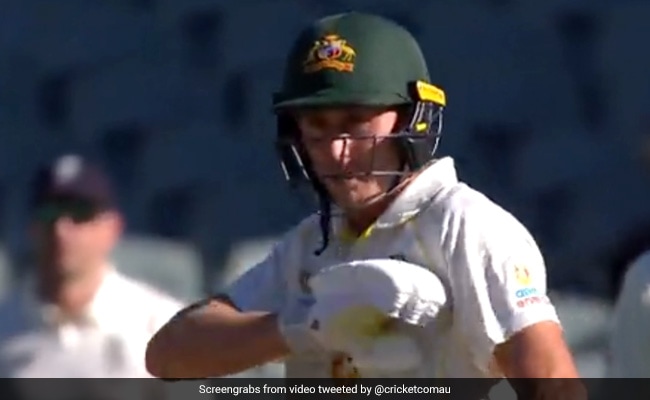 Marnus Labuschagne praises self on Day 1 of Ashes Test© Twitter

Marnus Labuschagne is an interesting character. There is rarely a dull moment with Labuschagne at the crease. His unusual mannerisms like a loud “no run’” after a defensive push or different body movements after letting the ball go are equally entertaining as his batting. The Australian right-hander on Thursday found a new way to leave the cricket fans and the commentators in splits. Labuschagne praised self after handling a Ben Stokes bouncer on Day 1 of the Australia vs England second Ashes Test in Adelaide.

It transpired in the 36th over of Australia’s first innings. England all-rounder Ben Stokes bowled a bouncer. Labuschagne ducked under it perfectly and immediately said “Well played Marnus!” before nodding at the bowler and patting self.

Marnus’ self-praise was captured by the stump-mic. In the video shared by cricketaustralia.com.au, the commentators were heard enjoying a good laugh.

The talented right-hander had a good day with the bat too. He was unbeaten on 95 at stumps on Day 1, inching towards a deserved hundred as Australia started the day-night pink ball Test on a positive note. Australia were 221/2 with Labuschagne and stand-in captain Steve Smith in the middle.

Labuschagne battled hard for 275 balls in which he has so far hit seven fours. Australia’s No.4 had luck by his side too. He was dropped by Jos Buttler off James Anderson’s bowling towards the fag end of the day’s play. He was on 95.

“A few prayers up there because I don’t know how that happened,” Labuschagne said of Buttler’s costly mistake.

“There’s a bit of disbelief — it is my job to capitalise on that now, I gave him a chance… I’ve got to make sure tomorrow no chances.”

The tourists did snare an early breakthrough with Broad getting Marcus Harris for three, before Warner and Labuschagne put on 172 for the second wicket.

Warner looked destined for his 25th Test century as he began to open his bat, but fell in the nervous 90s for the second Test in a row, caught by Broad off Ben Stokes.