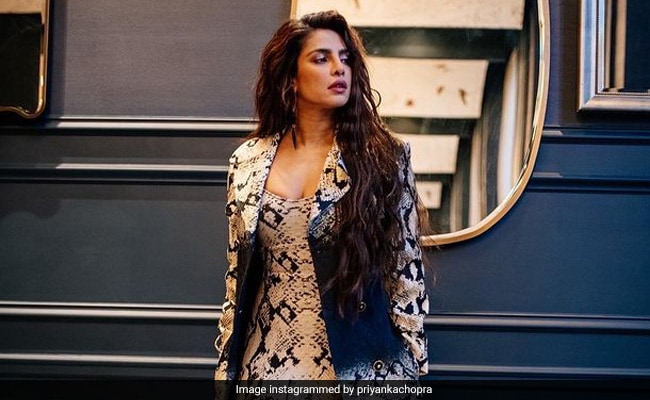 There are superstars and then there is Priyanka Chopra. The actress, who has transcended the boundaries of language with her acting prowess, is breaking one glass ceiling at a time. Now, the star is creating history by playing a pivotal role in the latest instalment of TheMatrix franchise. Priyanka Chopra is avidly promoting The Matrix Resurrections, looking like an absolute goddess as she moves from one event to another. On Wednesday, Priyanka Chopra dropped a series of pictures from the second day of promotions. Dressed in a Roberto Cavalli dress and blazer, the actress sent the Internet into meltdown with her fashion sense.

Priyanka Chopra’s first day of promotions was just as fashionable. The actress, who plays Sati in The Matrix Resurrections, made a grand statement in a printed dress and a long (very, very long) braid as she embarked on the promotions. In the caption, she wrote, “Day one of Matrix press week is complete.”

In addition to The Matrix Resurrections, Priyanka Chopra will be seen in the series Citadel, for which the actress has just finished shooting. On wrapping up the series, she shared a bunch of pictures from the shoot and deemed it her most intense piece of work. In the caption, Priyanka Chopra wrote, “Photo dump, It’s a wrap on Citadel. Phew…A whole year of doing the most intense work during the most intense time. It could not have been possible without this incredible lot of people. Some you see here, some you don’t. It’s been hard but when you all see it.. it will be worth it! Onwards and upwards.”

Coming back to The Matrix Resurrections, Priyanka Chopra will feature alongside Keanu Reeves, who is headlining the film, as well as Carrie-Anne Moss, Jada Pinkett Smith, Yahya Abdul-Mateen II, Jessica Henwick, Jonathan Groff, and Neil Patrick Harris among others. The movie is slated to release on December 22.