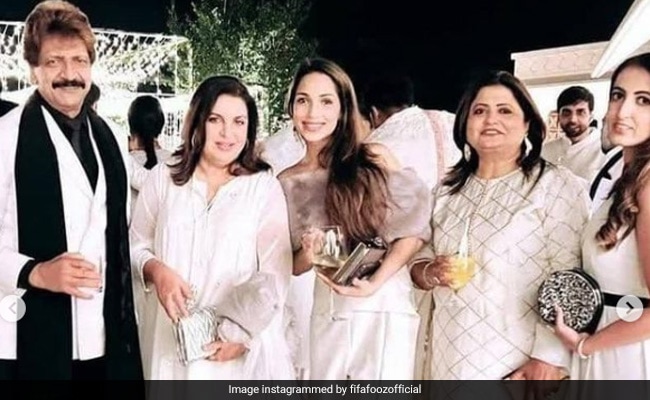 Rajkummar Rao and Patralekhaa’s engagement ceremony was a low-key affair with only family members and a few friends in attendance. From the film fraternity, only filmmaker-choreographer Farah Khan and actors Huma Qureshi and her brother Saqib Saleem were a part of the celebrations. Farah Khan and Saqib were pictured with other guests at the ceremony. Pictures from the couple’s engagement have been shared by several fan pages on social media. The theme for the night was white. The bride-to-be wore a white and silver slit gown with a long trail, while Rajkummar picked a white kurta, which he wore with matching sneakers. Rajkummar Rao and Patralekhaa have been dating for over 6 years and are set to get married on Sunday night. They co-starred in CityLights.

See the pictures of the guests at the engagement ceremony here:

Saqib Saleem shared a few pictures, also featuring sister Huma Qureshi and wrote: “Who has a caption for both these pictures?” He added the hashtags #indianwear #bachchanvibes.

Meanwhile, a video of Rajkummar Rao’s proposal to Patralekhaa is going insanely viral. Take a look at the video here:

Patralekhaa made her debut in Bollywood opposite Rajkummar Rao in the film CityLights. The actress has also starred in films such as Love Games, Badnaam Gali and Nanu Ki Jaanu, to name a few.

Rajkummar Rao made his Bollywood debut with Love, Sex Aur Dhokha. His breakout role was in the 2013 film Kai Po Che! Rajkummar has also featured in critically-acclaimed films like CityLights, Shahid, Omerta, Newton and Aligarh. The actor recently starred in Hum Do Hamare Do. His upcoming projects include Badhaai Do and Monica, O My Darling.