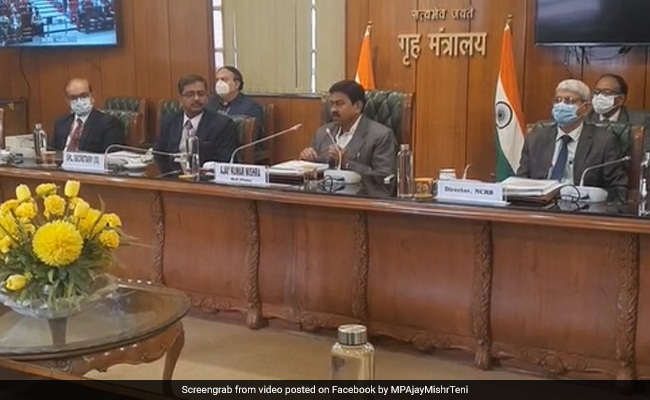 Union Minister Ajay Mishra Teni today posted a video on Facebook of a conference in the Home Ministry, unfazed by calls in parliament for his sacking over allegations that his son Ashish Mishra ran over farmers in Uttar Pradesh’s Lakhimpur Kheri.

Mr Mishra, a junior Home Minister in Prime Minister Narendra Modi’s government, has so far escaped any action whatsoever, despite allegations that he and his son were both at Lakhimpur Kheri when eight people, including four farmers, were killed. He has also been accused of shielding his son, who has been in jail since his arrest in October.

The BJP has ruled out his removal, and his Facebook post indicates business as usual for him, away from the chaos in parliament. He has clocked in to office every day.

“Our Prime Minister (Narendra Modi) and Home Minister (Amit Shah) are trying to break the old practice where proof on criminals was collected on oral evidence. We are trying to incorporate forensics and scientific collection of evidence as much as possible. That should make up at least 70-80 per cent of the evidence during prosecution so that cases are water-tight,” Mr Mishra tells officials in the video.

The Minister’s address to his team contrasts sharply with his attack on a journalist yesterday. Mr Mishra was caught on camera lunging at the journalist, who had asked him about a probe panel report recommending new charges against him.

“Don’t ask these stupid questions. Dimag kharaab hai kya be (Are you mad?)…You thieves, you frame an innocent man,” the minister shouted.

He also pounced on a reporter and snatched his mic. “Mic band karo be (shut the mic),” he lashed out.

The BJP, facing an election early next year in Uttar Pradesh, has stood by him through an escalating opposition offensive.

“The minister must resign. He is a criminal,” Congress leader Rahul Gandhi said in the Lok Sabha today, accusing PM Modi of protecting him.

Sources told NDTV today that the party’s senior leadership is not in favour of precipitate action against Mr Mishra, and that he will not, at this time, be removed from the Council of Ministers.

“A father cannot be punished for the actions of his son,” BJP sources said.