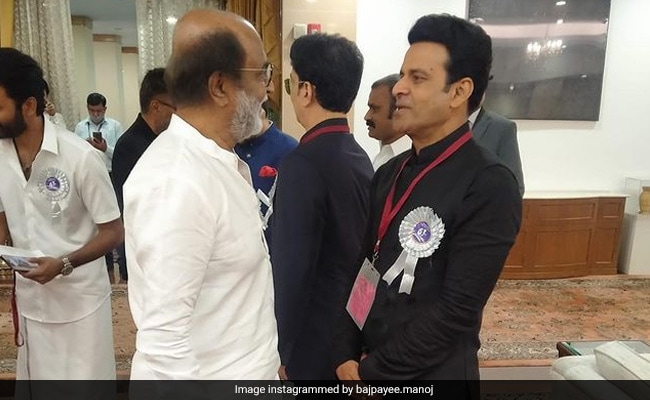 Sharing the photos, the actor wrote: “Some moments with the greats during the National Film Awards ceremony!”

Bhonsle is directed by Devashish Makhija and it shows the story of a retired Mumbai Police constable (played by Manoj Bajpayee) who tries to help migrants fight against local politicians.

Recently, in an interview with Hindustan Times, Manoj Bajpayee spoke about meeting Rajinikanth at the National Awards. “Rajinikanth sir is a legend and I’ve always looked up to him for the journey he has had. He came from a humble background and created such a big name for himself,” he told the publication and added: “He treats everyone with a lot of humility. I spoke to him but it had nothing to do with cinema but spirituality.”

When asked about what conversation he had with Dhanush at the ceremony, Manoj Bajpayee told Hindustan Times: “I had a long conversation with Dhanush. We shared our thoughts on the films we like and his films that I’ve watched. He’s a remarkable young mind doing some remarkable films. He’s very inspiring.”

On Monday, Dhanush and his wife, director-singer Aishwarya, shared pictures of the Asuran actor and Rajinikanth holding their prizes.

At the National Awards, Kangana Ranaut won her third Best Actress prize for her performances in Manikarnika (2019) and Panga (2020).