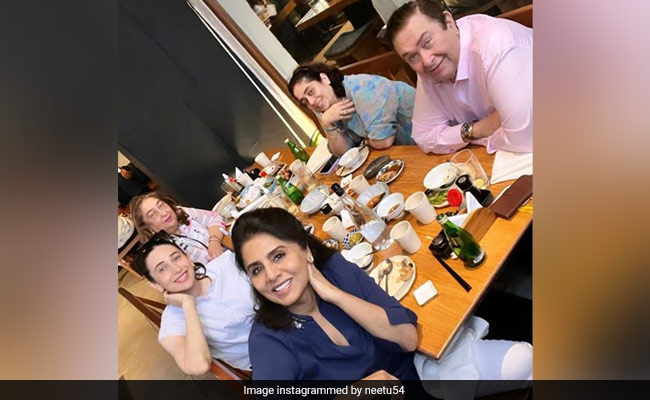 Neetu Kapoor holds her family close to her heart. And, on Wednesday, we saw the actress making some wonderful memories with her niece Karisma Kapoor, brother-in-law Randhir Kapoor and sister-in-law Rima Jain. Randhir Kapoor and Rima Jain are siblings of Neetu Kapoor’s late husband, actor Rishi Kapoor, while Karisma Kapoor is the daughter of Randhir Kapoor. Sharing a picture from the lunch, Neetu Kapoor wrote, “These outings are so special nowadays,” along with heart-eye, evil eye amulet and heart emojis.  In the image, the group smiles at the camera after what seems to have been a scrumptious Japanese lunch.

The same snapshot was also shared on Instagram by Karisma Kapoor. In the caption, Karisma wrote, “Family lunches are the best. Missing a few.”

The Kapoors take their family time seriously. A few weeks ago, we saw Karisma Kapoor spending some quality time with her parents Randhir Kapoor and Babita Kapoor as well as her sister Kareena Kapoor Khan. The family came together for a Saturday lunch. Sharing the post, Karisma Kapoor wrote, “Family time.”

On the occasion of son Ranbir Kapoor’s birthday, Neetu Kapoor too shared a picture from her New Year celebration. In the image, she is seen with her children, daughter Riddhima Kapoor Sahni and her husband Bharat Sahni, and son Ranbir Kapoor and his girlfriend, actress Alia Bhatt.

Recently, on the occasion of Raksha Bandhan too, Neetu Kapoor shared her photo of her children, Ranbir and Riddhima, and wrote, “Cutiesss pre-Raksha Bandhan dinner.”

A few weeks ago, Neetu Kapoor shared a photo of her children along with her granddaughter Samara and Alia Bhatt and wrote, “My world.”

Neetu Kapoor also shared a photo with her family members including Karisma Kapoor, Randhir Kapoor and Rima Jain, a few months ago, and wrote, “An afternoon with family who are more friends.”

On the work front, Neetu Kapoor was last seen in the film Besharam. She will appear in Jug Jugg Jeeyo, alongside Anil Kapoor, Neetu Kapoor, Varun Dhawan and Kiara Advani.