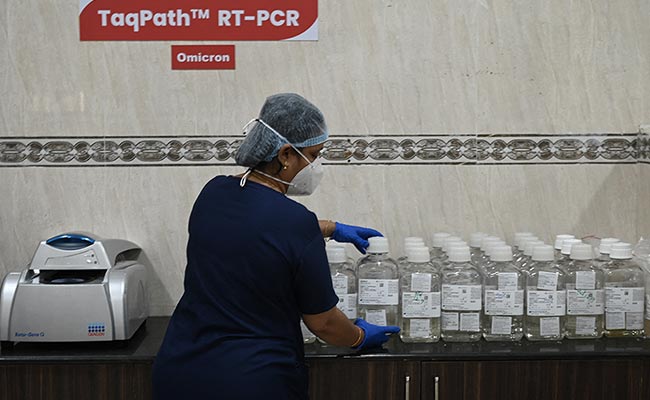 Ten Omicron Covid cases have been detected in Delhi so far. (File)

Karnataka, Delhi and Gujarat together today reported 10 fresh cases of the Omicron variant of coronavirus taking the countrywide tally of this strain to 83 even as the national capital with a total of 85 new COVID-19 cases recorded its highest single day rise in the last 137 days.

Karnataka, Delhi and Gujarat reported five, four and one fresh cases of the Omicron variant to take the total to eight, ten and five respectively, according to a tally of the new infections from the states.

Union Home Secretary Ajay Bhalla, meanwhile, reviewed the COVID-19 situation in the country and the preparedness of the health infrastructure of all Union territories, according to a home ministry spokesperson.

Maharashtra has so far reported the highest number of Omicron cases at 32, followed by Rajasthan at 17. These cases have also been reported in the states of Karnataka, 8, Gujarat, 5, Kerala, 5, Telangana, 2, Tamil Nadu, 1, West Bengal, 1, and Andhra Pradesh, 1, and Union Territories of Delhi, 10, and Chandigarh, 1. The country’s first two cases of the Omicron variant were detected in Karnataka on December 2.

Karnataka Health Minister K Sudhakar said five more cases of the Omicron variant were detected in the state to take its tally of the new strain to eight.

The country’s first two Omicron cases– a South African national who has left the country, and the other a local person, a Doctor with no travel history– were detected in Bengaluru.

Delhi Health Minister Satyendar Jain said the Omicron variant was detected in 10 people so far in the national capital and none of them has developed “severe” disease.

He said 40 people are currently admitted to the special facility at the Lok Nayak Hospital meant for isolating and treating suspected Omicron cases. Of them, 38 are COVID positive.

“Ten Omicron cases have been detected in Delhi so far. One of them has been discharged,” Jain told reporters.

There has been no “severe” case so far, he said.

The minister said many international travellers are turning out COVID positive upon arrival at the Indira Gandhi International Airport.

“Eight such people were admitted to the hospital today (Thursday),” he added.

On Tuesday, Jain had said the Omicron variant of coronavirus has not spread in the community so far and the situation is under control.

On August 1 this year, Delhi had logged 85 COVID-19 cases at a positivity rate of 0.12 per cent along with one fatality. It was on June 29 when the positivity rate was recorded at 0.15  per cent that the number of fresh cases stood at 101 and four deaths were reported.

The 85 cases that were recorded on Thursday came out of 56,027 tests, including 50,879 RTPCR tests, and there was no death due to COVID-19 in the last 24 hours in Delhi, according to the Delhi Health government data.

There are currently 475 active cases of coronavirus in the national capital which include nine cases of the Omicron variant.

About the rise in COVID cases, a senior doctor from Delhi government-run GTB Hospital, requesting anonymity, said, “The last three-four months went off smoothly, but the spurt in cases was impending.

“Worldover, a spike in cases is being seen and some countries have even imposed lockdown. People only wake up when they see a rise in cases. It is essential that people wear masks and maintain social distancing because it is expected that the cases may rise again.” In Gujarat, a 41-year-old woman health worker was found infected with the Omicron variant at a village in Vijapur tehsil of Mehsana district on Thursday, officials said.

“The woman serves as an Accredited Social Health Activist (ASHA). She does not have any history of foreign travel, but she recently came in contact with her relatives who had arrived from Zimbabwe, one of the ‘at risk’ countries,” Chief District Health Officer Dr Vishnubhai Patel said.

She is currently undergoing treatment in an isolation ward created in a government hospital at Vadnagar town of Mehsana and her condition is stable, he said.

“The woman recently lost her husband to cancer. To attend the condolence meet, her husband’s elder brother and his wife came from Zimbabwe last month. Both of them tested negative for COVID-19 in all the three tests conducted on them,” Patel added.

But the authorities decided to carry out contact tracing as a precautionary measure and the woman was found positive for coronavirus on December 10, following which her samples were sent to the Gandhinagar-based Gujarat Biotechnology Research Centre (GBRC) for genome sequencing, the official said.

“The woman’s genome sequencing on Thursday established that she is infected with the Omicron strain. Her mother-in-law and another relative, who came in her contact, also tested positive for COVID-19 yesterday. We have sent their samples to GBRC to know if they are also infected with this variant,” Patel said.

In Kerala, Health Minister Veena George said those who have come from abroad and have been asked to practice self-observation, as per central government guidelines, should not be complacent in doing so.

The minister, at a high level meeting, said such persons should avoid social interactions, crowded places, theatres and malls and should wear an N-95 mask if they go out, according to a state government release.

She also said that such persons should observe if they have any symptoms and if they show symptoms, they should immediately quarantine themselves and inform the health workers.

The decision was taken after a person who had come from Congo, a non-high risk African nation, tested positive for Omicron and now has a large contact list as he went to shopping malls and restaurants instead of practicing self-observation.