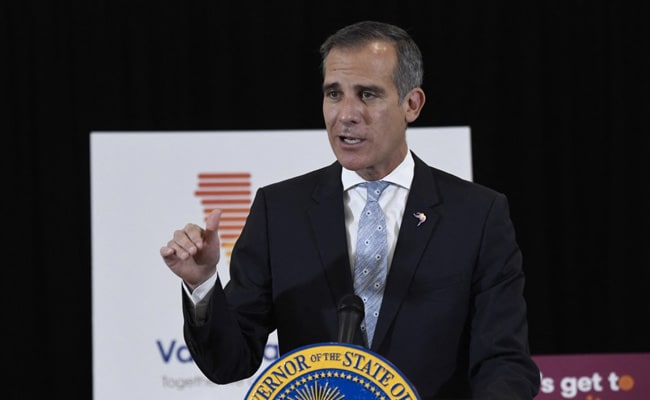 Eric Michael Garcetti, 50, is currently serving as the Mayor of Los Angeles

The growing defence trade between India and the US is one of the major success stories of the bilateral relation, US President Joe Biden’s nominee for next envoy to New Delhi has told lawmakers.

Eric Michael Garcetti, 50, is currently serving as the Mayor of Los Angeles and is a personal confidant of Mr Biden.

Mr Garcetti, during his confirmation hearing as US Ambassador to India, said that he fully supports the law of the land, the implementation of CAATSA and part of that is the waiver provision.

He was responding to a question on enforcement of CAATSA sanctions on India now that New Delhi has started receiving delivery of the S-400 missile system from Russia.

“I don’t want to prejudge the Secretary’s decision about sanctions or a waiver. And I do want to tell the Chairman, Ranking Member (and) all the members (of the Senate Foreign Relations Committee) I do fully support the law of the land, the implementation of CAATSA as law here and part of that is the waiver provision,” Mr Garcetti said.

The Los Angeles Mayor said, if confirmed, he would advocate the continued diversification of India’s weapons system, the threats to US own weapons systems.

“If that diversification doesn’t occur because we have to protect our data and our systems,” he said, adding that he would work towards growing the India-US Major Defence Partnership. “I think it is one of the great success stories of the last few decades from zero to USD 20 billion in procurement, the intelligence sharing that we have, the interoperability, the exercises, the maritime work that we’re doing,” he said.

India is the only designated Major Defence Partner of the United States.

Responding to questions related to human rights in India, Mr Garcetti assured the lawmakers that he would personally be talking to various stakeholders in India on this issue.

“I would not only just bring it up, but it would not be something at the end as an obligation. It will be a core piece of what I’ll be engaging my Indian counterparts have confirmed with,” he said.

“There’s no question that the US India relationship should be underpinned by our common commitment to democracy, human rights and to civil society…If confirmed, I will actively raise these issues. I’ll raise them with humility. It’s a two-way street on these, but I intend to engage directly with civil society,” he said.

“There are groups that are actively fighting for the human rights of people on the ground in India that will get direct engagement from me. We know that democracies are complicated and we can look at our own and at India’s, but it’s a cornerstone of our shared values,” Mr Garcetti said.