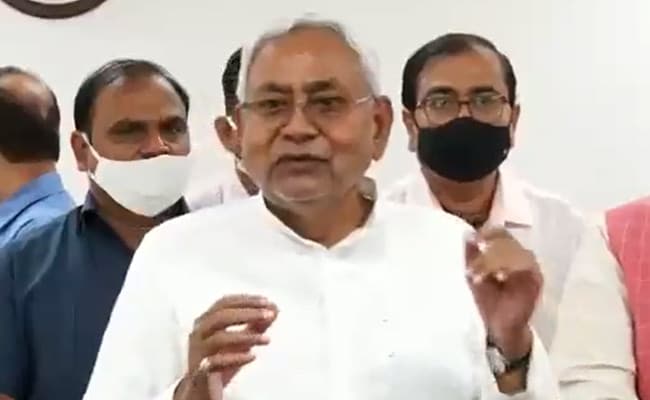 Nitish Kumar said “Many people played their part in the war of Independence”.

Bihar Chief Minister Nitish Kumar failed to toe the BJP line on the Jinnah controversy today. In some hard hitting remarks that appeared to club his Uttar Pradesh counterpart Yogi Adityanath with Samajwadi Party chief Akhilesh Yadav who set off the controversy, he said “Those who are creating controversies were not around when the country got freedom and they played no role in freedom movement”. Then dismissing the matter altogether, he said, “Is it pleasant to discuss such issues?”

Mohammad Ali Jinnah is the founding father of Pakistan and will receive respect there, the Bihar Chief Minister said. “Many people played their part in the war of Independence and the country got divided into two parts. This is significant in the other country (Pakistan)… Those who played their role in making the country will always have their place, respect in that country,” Mr Kumar said when asked about the issue.

“Did Bapu (Mahatma Gandhi) like this? No, Bapu did not like this. But the situation led to this (partition). And later, Pakistan got divided into two. No point discussing all this here. It not required. It is not a good thing that the country got divided. If our country was united, how much it would have prospered,” he added.

Mr Kumar had made a trip to Pakistan in 2012 during which he also visited Jinnah ‘s tomb in Karachi.

“Sardar Patel, Mahatma Gandhi, Jawaharlal Nehru and Jinnah studied at the same institute and became barristers. They became barristers and they fought for India’s freedom. They never backed away from any struggle,” Mr Yadav said at an election campaign.

It drew harsh rejoinders not just from Yogi Adityanath but also AIMIM leader Asaduddin Owaisi. Yogi Adityanath accused the Samajwadi chief of Muslim appeasement ahead of elections. Mr Owaisi said Indian Muslims has chosen not to follow the path shown by Jinnah and Akhilesh Yadav will not endear himself to Muslims with such comments.

“His divisive mindset came to the fore once again when he tried to glorify Jinnah by equating Sardar Patel with him. It’s the Talibani mentality that believes in dividing,” the UP Chief Minister said, demanding an apology from Akhilesh Yadav.

“If Akhilesh Yadav thinks that by giving such statements he can make a section of people happy, I think he is wrong and he should change his advisers. He should also educate himself and read some history,” said Mr Owaisi.