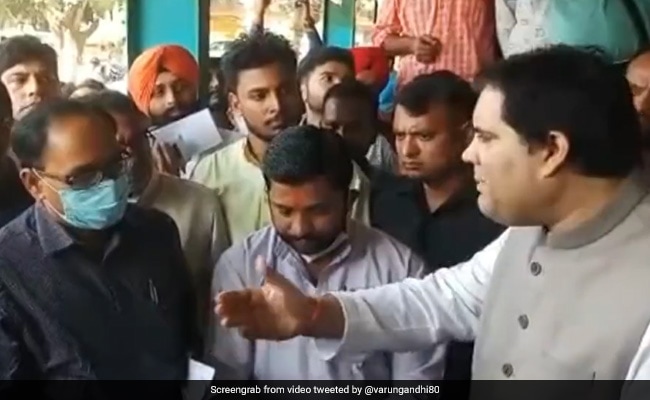 BJP MP Varun Gandhi doubled down on his show of support to farmers in Uttar Pradesh who have been protesting against fertiliser shortage and slow sales of foodgrains. Mr Gandhi met a group of farmers and some district officials at an agriculture market in UP’s Pilibhit and asked them to point out corrupt agents who seek commission to clear their foodgrains.

“If there is corruption, cruelty against farmers here, I will not plead with the government to take action. I will take the accused straight to court and will make sure the accused are arrested,” Mr Gandhi said at the meeting. To this, the crowd clapped and cheered in approval.

Mr Gandhi was dropped from the party’s national executive earlier this month. He has been criticising his own party for some time now in the farmers versus government stalemate since last year. He even spoke out against his colleague and Union Minister Ajay Mishra, whose son Ashish Mishra was allegedly linked to violence in UP’s Lakhimpur Kheri during a farmers’ protest.

At the meeting today, Mr Gandhi said farmers should get a minimum price for their crops. “Till there is no statutory guarantee of minimum support price (MSP), farmers will continue to be exploited in mandis. Strict action should be taken,” Mr Gandhi said.

“Farmers are in deep trouble. Unseasonal rains, shortage of fertilisers… farmers are under immense strain. Yet you keep pointing out small things like the foodgrains are not good, or they have a high moisture content to deny buying their stock,” Mr Gandhi told the officials who were among the farmers.

Farmers mostly from Haryana, Punjab and UP have been protesting against three new agriculture laws, which they allege would empower private parties to control the farm sector. The government has denied the allegations, and maintained that the new laws are in fact beneficial for famers as they have done away with middlemen.