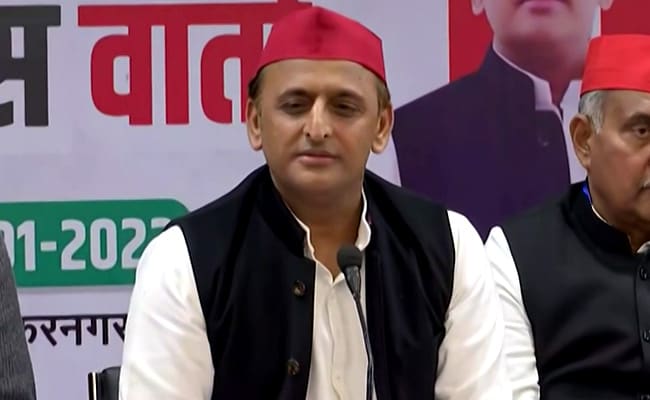 Samajwadi Party chief Akhilesh Yadav on Sunday slammed Chief Minister Yogi Adityanath for his “garmi nikal denge (will take off the heat)” remark and said that “garmi nikle na nikle, lekin Samajwadi sarkar aayegi to bharti niklegi” (Not sure about heat, but if our government is formed, there will be job recruitments).

Notably, Yogi Adityanath, referring to the Samajwadi Party candidates in the upcoming Assembly polls in the state, had said last month that his government will take out the heat that is being displayed, after March 10.

“The candidate of the Tamanchawadi Party from Kairana is threatening, that is, the heat has not calmed down yet! After 10th March the heat will cool down…” Yogi Adityanath had tweeted in Hindi.

Responding to his comment, Mr Yadav said while addressing a rally in Agra, “The government which does not understand the plight of the farmers and the poor, the Chief Minister is saying that if their government is formed then ‘garmi nikal denge‘ (will show them their place). Seems like he is from a cold place. I want to tell the Chief Minister that ‘garmi nikle na nikle, lekin Samajwadi sarkar aayegi to bharti niklegi‘ (Not sure about heat, but if our government is formed, there will be recruitments).”

The SP chief also mocked the Centre’s Ude Desh ka Aam Naagrik (UDAN) Scheme and said that the diesel and petrol have become so costly that the youth is not able to run a motorcycle.

“This is an election to save democracy and the Constitution given by Dr BR Ambedkar. Almost five years have passed, what development has taken place? The BJP used to say that the people wearing ‘hawai chappal‘ (slippers) will sit in ‘hawai jahaj‘ (airplane), but since ever the diesel and petrol have become costly, the tractor of the poor and motorcycle of youth is not able to run,” he said.

Referring to the aspirants of the defence and security forces, Mr Yadav announced that if his government is formed he would give some relaxation in the age of the recruitment of such exams in which the youth could not appear due to COVID-19 and crossed their age limit.

“Whatever facilities we have to give for the youth wanting to join the army, we will give and ask the army to recruit them if our government is formed. Due to Corona, many people could not join, we will give relaxation in age if there is a need,” he said.