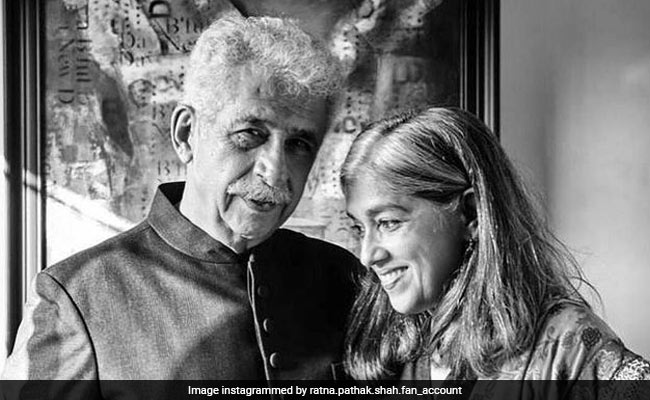 Ratna Pathak Shah and Naseeruddin Shah’s love story is nothing less than a fairy tale. The duo fell in love with each other while working together in the 1970s and have been “inseparable ever since.” In an interview with The Indian Express, the 64-year-old actress summed up her love life with Naseeruddin Shah, 71, in these four words – “Sambhog Se Sanyaas Tak.” It is actually the title of their first theatre play together and that’s how Ratna Pathak Shah defines her and the National Award-winning actor’s life together. When asked about how her love story with Naseeruddin Shah started, the actress said: “Itna kuch bhi romantic nahi hua tha. We fell in love and have been inseparable ever since. The first theatre play we did together was titled Sambhog Se Sanyaas Tak, and that is the story of our life” and added hilariously: “Bas sanyaas lena baaki hai.”

Naseeruddin Shah and Ratna Pathak met during their theatre days. They got married in 1982. They are parents to two sons – Imaad and Vivaan – who are also actors.

She added that Naseeruddin Shah “inspires” her every day – his “ability to work hard” pushes her “to do better.” She continued: “He is an extraordinarily hard-working actor, which inspires and pushes me to do better. I am very lazy. Itni hardworking nahi hu. Toh Naseer ki dekha dekhi mein, mujhe bhi mehnat karni hi padti hai.”

The couple have worked together in films like Jaane Tu… Ya Jaane Na, Mirch Masala, Encounter: The Killing, Mandi and The Coffin Maker, among others.

Ratna Pathak Shah awaits the release of her upcoming film Hum Do Hamare Do. The film, directed by Abhishek Jain, also stars Paresh Rawal, Rajkummar Rao and Kriti Sanon in main roles. It premieres on Disney+Hotstar on October 29.