One of the myths about Prime Minister Narendra Modi is that he uses religion for politics. In fact, it’s the other way around. Modi uses politics for religious purposes. While at Varanasi yesterday, inaugurating the Kashi-Vishwanath corridor, Modi was seen performing elaborate Hindu religious rituals. This comes naturally to him. It is because he is more of a Hindu leader who happens to be in politics. And his lifelong ambition appears to be to unite Hindus and empower them so they are never again ruled by other religions as it was in the past, first by Islam and later by Christianity. One might differ with his interpretation of history, and one might call it a false consciousness, but that is what it is.

So unlike my left-liberal friends who feel marginalised today, I am not surprised when I see Modi, holding a constitutional position in a secular democracy in which religion and state should be separate, behaving like a Hindu leader performing religious rituals. The Indian Express in its editorial finds the entire Kashi episode a fundamental shift. It very subtly hints that it’s not good for the country and says the Opposition is not doing enough to stop the BJP. In a way, it blames Opposition parties including the Congress for the situation that the country is in. This again is the result of not understanding of the ideology which drives Modi and defines his politics. India did not take a defining turn on yesterday and the ‘fundamental shift’ did not occur when the Kashi-Vishwanath corridor inaugurated. It happened when the country gave an absolute majority in 2014 to Modi. Whatever has happened after that in the Indian nation-state is the logical progression. 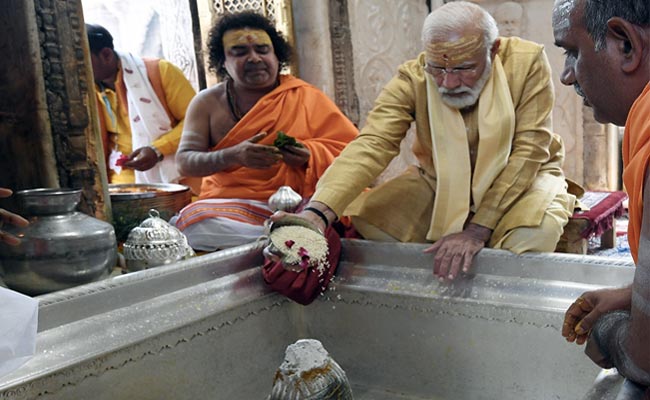 The 2002 riots established Modi’s credentials as a staunch Hindu leader willing to go to any lengths to teach a lesson to members of other religions daring to challenge the Hindu community. As the Chief Minister of Gujarat, he used every opportunity to reinforce that image. It is no coincidence that he publicly refused to don a Muslim cap at a public event. He also regularly used anti-Muslim phrases to polarise voters and win elections. But when he became the Prime Minister candidate of the BJP 2014, he was not sure if, at the national level, he would be accepted as a Hindu leader or his brand of politics would be welcome outside Gujarat.

So the world saw a different Modi. Here was a leader who was accused by his opponents of bigotry and communalism, presenting himself as a man with a vision for making the country great again with development was his forte. Overnight, the ‘Gujarat Model’ became dominant in the political lexicon. A carefully-crafted image of a man obsessed with development was projected and it was seeded into the national consciousness that he was not what the Opposition was branding him as.

Modi most brilliantly used development, a secular value in a secular democracy, as political currency; his genius lay in the fact that he let this secular value overwhelm his Hindu leader image. But once he reached the top, he used every instrument of power to create a – narrative about the country needing a religious awakening, with Hindus needing to assert their dominance in their own country. In this endeavour, he ruthlessly used TV as a medium as it magnified manifold the visual impact of the Hindu grandeur. The live telecast of the inauguration of Ram Temple in Ayodhya and now in Kashi is part of that design. 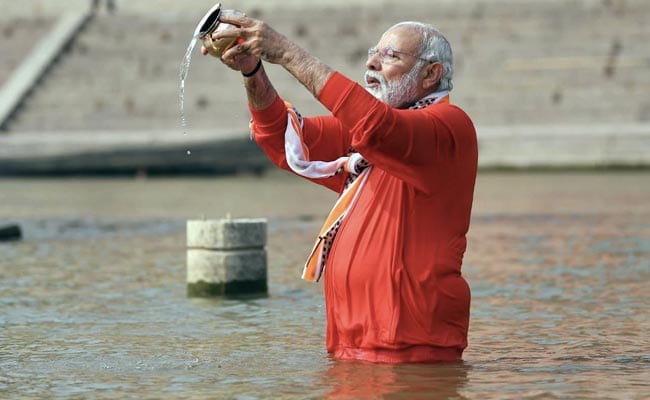 PM Modi took a holy dip in the river Ganga

For Modi, Ayodhya and Kashi is not politics but a matter of faith. It is an exercise to correct the wrongs of history as he perceives it. It is an attempt to teach a lesson to the followers of Islam that India is no longer a country where their writ will run disproportionately; India is primarily a Hindu nation, and Muslims have no option but to accept that fact and live with the guilt that their ancestors committed great sins in this country. The reference to Aurangzeb in Kashi is deliberate. Shiva-ji is used as metaphor for the assertion and rise of Hindu power. This mesmerises a section of Hindus because Modi visually takes them on a pilgrimage to the past.

When I was researching my last book, Hindu Rashtra, I was aghast to know that many big names of academia and journalism have no understanding of the RSS, have not read their original writings and have a very superficial knowledge about their ideology. It is no accident of history that many of these intellectuals and senior journalists belonging to the liberal school of thought did not see how the world would unfold when Modi became Prime Minister. They were seen singing paeans to Modi. And not surprisingly, many of them later said they regret having supported Modi. They failed to understand that it was not about Modi, but about the RSS and its ideology of Hindutva, which defines history as a 1,200-year-long religious war with Islam, and holds that this war will continue till Islam is vanquished in India. For them, the partition of India is part of a greater Jihadi design. Kashmir, in their opinion, is the unfinished agenda of Islamist forces. The government at the centre is not there to rule, or to provide development for millions, but it is there to seek revenge for partition and for the past. The regular references to ‘internal enemies’ are a pointer in that direction.

Despite the Places of Worship Act 1991, the issue of Mathura’s Krishna Janmabhoomi temple is being raked up again with petitions in the Supreme Court. The message is simple – that Ayodhya and Kashi have been recouped by Hindus, now Mathura is left. Of course, this entire exercise is linked to the UP assembly elections. The BJP is in deep trouble in UP. The non-performance of the Yogi Government is a threat to winning UP. Modi’s act in Kashi is also an exercise to remind Hindu voters that the BJP government is further needed to free Mathura from the clutches of the past.

The BJP’s narrative is that the construction of Ram Temple and Kashi corridor was possible only because there was a BJP government at the centre and a BJP government in Lucknow. Of course, it is just politics. But in the RSS’ scheme of things, politics is only a facilitator, it is not the primary exercise. Religion is the prime mover and the prime objective. The RSS initially believed that a social movement was the path to rebuilding a new Hindu society, but after the assassination of Gandhi, when the RSS was banned, it realised that politics was essential to protect their social movement, and thus, the Jan Sangh was born. Those who know the RSS know that Modi and the BJP hold the regeneration of Hinduism as the objective; politics is only the periphery, the core is religion.

(Ashutosh is author of ‘Hindu Rashtra’ and Editor, satyahindi.com.)