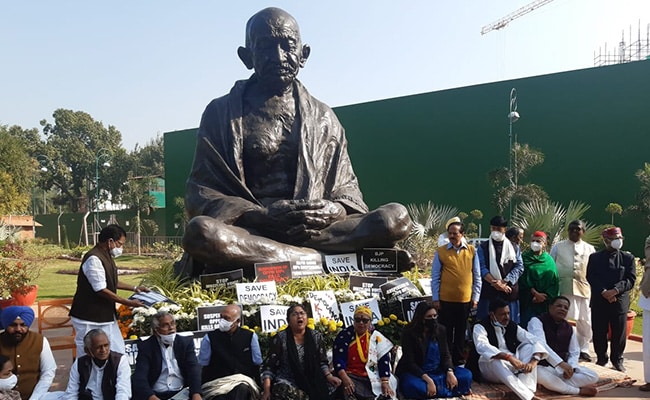 Opposition MPs are protesting their suspension at the Gandhi statue in Parliament.

Leaders of various opposition parties today met to decide on a joint strategy to press for their demand of revoking the suspension of 12 Rajya Sabha MPs.

The floor leaders of various parties met in the chamber of Leader of Opposition in the Rajya Sabha, Mallikarjun Kharge, and decided to intensify their agitation.

Opposition MPs in the Lok Sabha and Rajya Sabha marched from the Gandhi statue in Parliament complex to Vijay Chowk at around 12:45 pm in support of their demands.

As many as 12 opposition MPs were suspended from the Rajya Sabha on November 29 for the entire Winter session of Parliament for their “unruly” conduct in the previous session in August.

The Opposition has termed the suspension as “undemocratic and in violation of all the Rules of Procedure” of the Upper House.