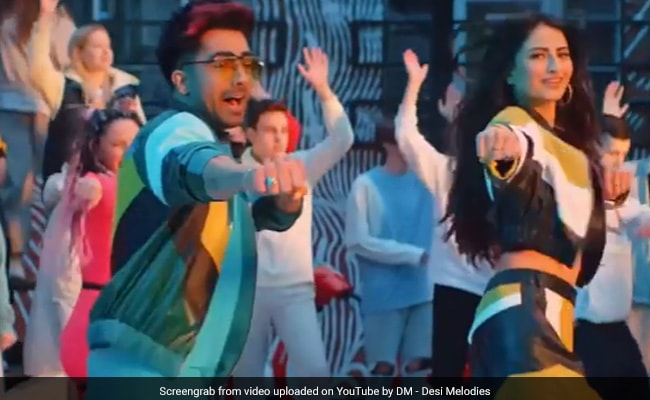 Bijlee Bijlee: Palak Tiwari and Harrdy Sandhu in a still from the song. (Image courtesy: YouTube)

It’s here. Finally. We are talking about Shweta Tiwari’s daughter Palak’s debut music video titled Bijlee Bijlee is out now. Palak features alongside singer Harrdy Sandhu in his new track. Her stupendous dance moves and “celestial outfits” in Bijlee Bijlee will keep you glued to the screen. She set the stage on fire with her expressions and groovy steps in the music video, in which she features as a superhuman. Bijlee Bijlee has been sung by Harrdy Sandhu and composed by Jaani. The music has been given by National Award-winning singer-composer B Praak.

Sharing Bijlee Bijlee on social media, Palak Tiwari, who will soon make her acting debut, wrote: “IT’S OUT RIGHT NOW! Please check it out and give it all your love. I’ve been obsessed with this song for one month and I’m so excited to share it with all of you.” Shweta Tiwari also shared the track on her Instagram profile.

Palak is Shweta Tiwari’s daughter with her first husband Raja Chaudhary. The actress has a son named Reyansh with estranged husband Abhinav Kohli.

Palak Tiwari will soon make her Bollywood debut with Rosie: The Safforn Chapter, a film produced by Vivek Oberoi and directed by Visal Misra. Vivek also co-stars with Palak in the film.

Palak Tiwari’s debut film was supposed to be a project with Taare Zameen Par actor Darsheel Safari. However, she retracted from the project in 2018 because of her board exams.

Palak’s mom Shweta Tiwari is best-known for playing the role of Prerna Basu in the first installment of Ekta Kapoor’s popular daily soap Kasautii Zindagii Kay. She participated in the TV reality show Bigg Boss 4 and she was the winner of the season. She also starred recently in the TV show Mere Dad Ki Dulhan.