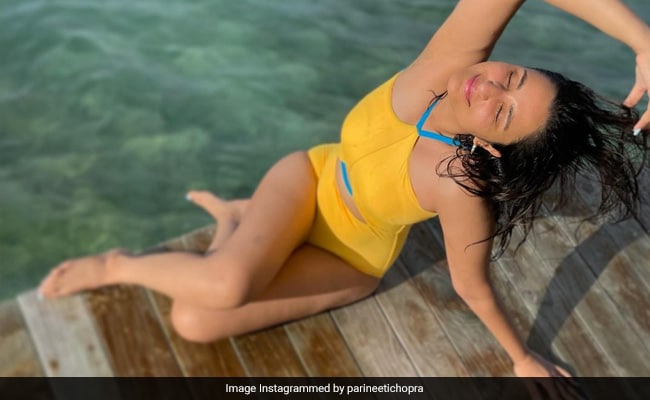 Parineeti Chopra is missing the ocean. The actress has shared it on Instagram with a jaw-dropping throwback postcard from her time in the Maldives. Really? Yes, she did. Feeling blessed, already? There is more. Parineeti, in her caption, said, “God, I miss the ocean. (Yes, I am aware it’s only been a month).” She added crying face and sparkle emojis to it. Parineeti’s brother Shivang Chopra, who had accompanied her on the trip, was quick with his reply. “Preach bro, Preach,” he wrote. Saina Nehwal dropped a face with tears of joy emoji. Parineeti played the titular role in Saina’s biopic.

Parineeti Chopra had a blast in the Maldives. From a week-long scuba diving tour to soaking up the vitamin Sea, the actress lived her days on the island nation to the fullest.

Remember the time when Parineet Chopra had announced her scuba diving adventure on Instagram. “For the next 7 days, Shivang and I are gonna live on a boat; doing what we love the most – scuba diving. There are 14 other shark chasers here. The phone network is really weak, but I’ll try taking you on the ride with me .. Wish us luck.”

Then the one from “between the dives”. Here, we see Parineeti enjoying her time in the ocean. For the caption, the actress wrote, “In between dives. Our boat is now crossing a big channel to go to the next location. Till then, we catch up on sleep, rest, play games and gear up for the big dives. More coming soon.”

As per Parineeti Chopra, this is how she meditates. Here, the actress is exploring marine life.

How can we miss Parineeti Chopra’s “sunburnt” postcard?