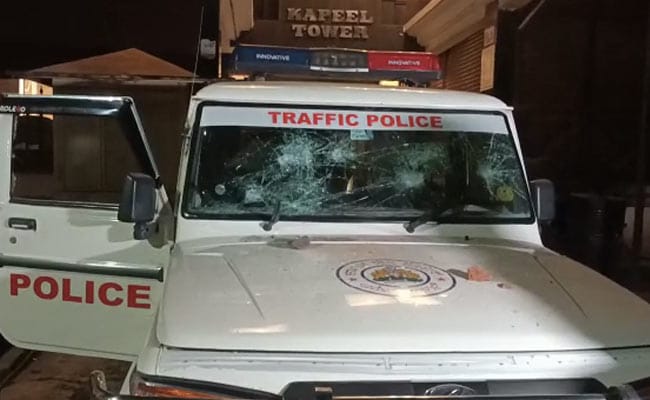 Following this incident, a crowd hurled stones at police and government vehicles in Belagavi.

He demanded the intervention of Prime Minister Narendra Modi in stopping “Kannada atrocities” and the “pervert mindset”.

Stating that Shivaji Maharaj is the “deity” of not only Maharashtra but of the entire country, Mr Thackeray, who heads Shiv Sena, said any disrespect and insult to the founder of the Maratha empire will not be tolerated.

A statue of the 17th-century king was allegedly desecrated in the Karnataka capital.

Following this incident, a crowd hurled stones at police and government vehicles in Belagavi around midnight, official sources said.

Maharashtra is locked in a bitter border dispute with Karnataka for the inclusion of border areas, including Belagavi, in the western state.

“PM Modi should direct the Karnataka government to take action in the matter. This incident (alleged desecration of the statue) cannot be taken lightly. For several years, Marathi-speaking people in Karnataka are facing atrocities. Now, the statue of Chhatrapati Shivaji Maharaj is desecrated,” Mr Thackeray said in a statement.

He referred to the speech delivered by PM Modi in Varanasi recently where he had mentioned Chhatrapati Shivaji.

“PM Modi had said in Varanasi that whenever India’s culture was crushed, warrior kings like Chhatrapati Shivaji Maharaj have risen. But just a few days after Modi’s remarks, Shivaji Maharaj’s statue is attacked in Karnataka which is ruled by BJP. Instead of taking action, the voice of the Marathi people is being suppressed. This is condemnable,” the CM said.

Mr Thackeray demanded that the prime minister intervene to stop “Kannada atrocities” on the Marathi people.

“It should be kept in mind that hurting the Marathi pride will prove costly. The Centre should give up double standards and take stern steps,” he said.

Maharashtra Urban Development Minister and Shiv Sena leader Eknath Shinde said the Karnataka government will be responsible for any reaction to the incident wherein ink was thrown at the statue (of Shivaji Maharaj).

Mr Shinde is the coordination minister for Marathi-dominated border areas of Karnataka.

“The statement of Karnataka chief minister Basavaraj Bommai that the incident was minor was also condemnable,” he said in a statement.

“Maharashtra will not tolerate the insult of the warrior king,” said Mr Bhujbal, who is also the coordinating minister for the Marathi-dominated border areas in Karnataka.

“We will win the fight on the streets and in courts (over the inclusion of Marathi-speaking areas in Maharashtra), ” he said.

Congress leader and Revenue Minister Balasaheb Thorat and Home Minister Dilip Walse Patil, who belongs to NCP, also condemned the incident and said the insult of Chhatrapati Shivaji Maharaj will not be tolerated.