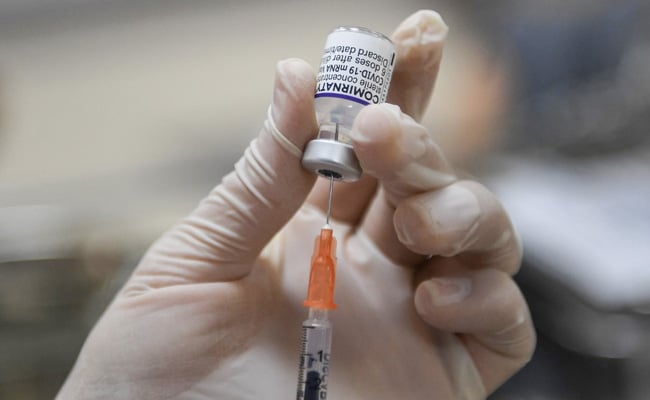 Two doses of Pfizer-BioNTech’s COVID-19 vaccine appear to have given 70 per cent protection against hospitalisation in South Africa in recent weeks, according to a major real-world study which suggests weaker efficacy against the new Omicron variant.

Around 78,000 of those results from November 15 to December 7 were attributed to Omicron. The 78,000 results are not confirmed Omicron cases, meaning the study cannot offer conclusive findings about the variant labelled “of concern” by the World Health Organization and reported in more than 60 countries.

South African scientists have so far confirmed around 550 positive tests as being Omicron, with the variant accounting for 78 per cent of sequences from November, more than the previously dominant Delta variant.

South Africa alerted the world to Omicron late last month, triggering alarm that it could cause another surge in global infections, and leading to the imposition of travel restrictions on southern Africa.

South Africa’s daily infections have since risen to around 20,000 in recent days.

The findings from a real-world analysis are some of the earliest on protection against Omicron outside of lab studies, which have shown reduced neutralising activity against the variant.

Based on analysis by Discovery’s clinical research and actuarial teams, and in collaboration with the South African Medical Research Council (SAMRC), the study calculated that two doses of Pfizer-BioNTech offered 70 per cent protection against hospitalisation compared with the unvaccinated during the recent surge in cases and 33 per cent protection against infection.

It said this represents a drop from 80 per cent protection against infection and compares with 93 per cent efficacy against hospital admission during South Africa’s outbreak of the Delta variant, which is the globally dominant variant and considered to be the most infectious to emerge during the pandemic.

Discovery cautioned that the study’s findings should be considered preliminary.

Glenda Gray, SAMRC president, said it was however encouraging that the Pfizer-BioNTech vaccine appeared to be offering good protection against severe disease and hospitalisation.

South Africa is using the Pfizer-BioNTech and Johnson & Johnson vaccines in its COVID-19 immunisation campaign, with more than 20 million Pfizer doses administered so far.

J&J and the SAMRC are conducting a large real-world study of J&J’s vaccine, and recent analysis has shown no deaths from Omicron, Gray said.

“So that’s the good news, it shows again that the vaccine is effective against severe disease and death,” she said.

With 70 per cent or more of the South African population estimated to have been exposed to COVID-19 over the past 18 months, high estimated levels of antibodies in the population might be skewing the data.

“This could be a confounding factor for these hospital admission and severity indicators during this Omicron wave,” Ryan Noach, chief executive of Discovery Health, said in a briefing on the study.

The analysis also shows protection against hospital admission is maintained across all ages, in people from 18 to 79 years, with slightly lower levels of protection for the elderly, it said.

Protection against admission is also consistent across a range of chronic illnesses including diabetes, hypertension, hypercholesterolemia, and other cardiovascular diseases.

It concluded that there was a higher risk of reinfection during the fourth wave than during previous waves and that the risk of hospitalisation among adults diagnosed with COVID-19 was 29% lower than during the country’s first wave early last year.

Children appeared to have a 20% higher risk of hospital admission with complications during the fourth wave than during the first, despite a very low absolute incidence, it said.

However, this trend aligns with a warning a recent days from South Africa’s National Institute for Communicable Diseases (NICD) that during the country’s third wave from June to September they had seen an increase in paediatric admissions and now, in the fourth wave, they are seeing a similar increase in admissions for children under five, she said.

South African scientists have said they cannot confirm a link between Omicron and the high admissions of infants, which could be due to other factors.

The WHO has said there were early signs that vaccinated and previously infected people would not build enough antibodies to ward off an Omicron infection, resulting in high transmission rates.

It is unclear whether Omicron is inherently more contagious than the globally dominant Delta variant, the WHO said.

Pfizer and BioNTech said last week that two shots of their vaccine may still protect against severe disease, because its mutations were unlikely to evade the T-cells’ response.