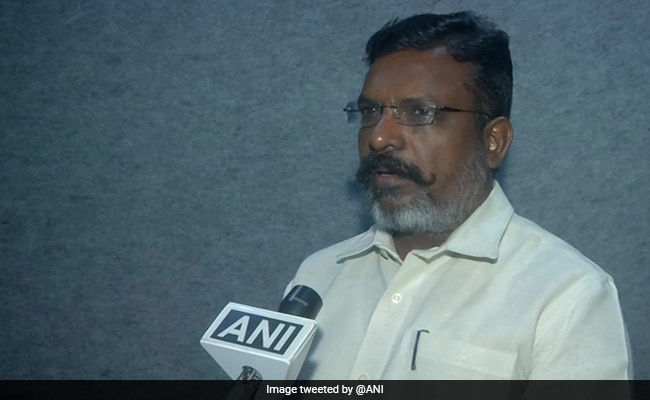 They’re not threatening Suriya, it’s a threat to the constitution and democracy: Thol Thirumavalavan

A day after Pattali Makkal Katchi (PMK) District Secretary, Palanisamy announced a reward of Rs 1 lakh for attacking actor Suriya for allegedly “tarnishing” the reputation of the Vanniyar community in the film “Jai Bhim“, Viduthalai Chiruthaigal Katchi (VCK) chief Thol Thirumavalavan on Thursday slammed PMK stating that whenever the party loses its political base in the state, it “creates controversy”.

He further termed the threat call an “anti-social activity” and said that it”s a “threat to the Constitution and democracy”.

The VCK chief’s remarks came after Palanisamy’s threat call to actor Suriya for allegedly “tarnishing” the reputation of the Vanniyar community in the film ”Jai Bhim”.

“Whenever PMK loses its political base, they create controversy. They’re not threatening Suriya, it’s a threat to the constitution and democracy. All democratic forces in Tamil Nadu are opposing PMK. Police should take action against such anti-social activity,” Mr Thirumavalavan told ANI.

Police security was provided at the residence of actor Suriya in T Nagar, Chennai following the threat call.

On Monday, the Vanniyar Sangam had issued a legal notice to Actor Suriya and Director TJ Gnanavel, demanding an unconditional apology from the makers of the film Jai Bhim for portraying the community in a bad light.

The notice sought damages in Rs 5 crore. The notice issued by PMK Advocate Balu said that the Sangam would file criminal defamation against the makers of the movie if they fail to comply with the demands within seven days from the time and date of receipt of this notice.

Vanniyar is a Most Backward Community which is the predominant community in northern districts of Tamil Nadu.