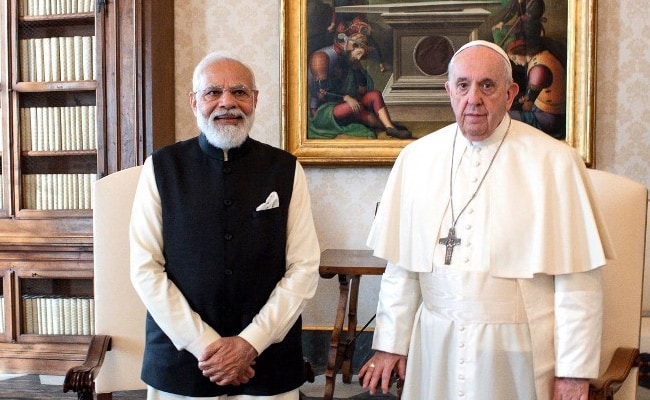 PM Modi is in Rome to attend the G20 summit of the world’s richest countries.

Pope Francis has accepted an invitation from Prime Minister Narendra Modi to visit, in a turnaround in relations with the Vatican following the failure of negotiations for a papal trip to the country in 2017.

There are about 20 million Roman Catholics in India, about 1.5 per cent of the population of 1.3 billion.

In 2016, Pope Francis said he was “almost sure” of visiting India the following year along with Bangladesh. But Indian Catholic Church leaders failed to convince PM Modi to invite him.

The last pope to visit India was John Paul II, who went to New Delhi in 1999 to issue a papal document on the Church in Asia.

“Had a very warm meeting with Pope Francis. I had the opportunity to discuss a wide range of issues with him and also invited him to visit India,” PM Modi said on Twitter on Saturday.

The Foreign Ministry said the invitation was for the pope “to visit India at an early date, which was accepted with pleasure”.

A Vatican statement gave no details of the meeting between Francis and PM Modi, the first between a pope and an Indian prime minister in more than two decades. PM Modi is in Rome to attend the G20 summit of the world’s richest countries.

At the time the 2017 visit fell through, Church officials said the Indian government had cited scheduling problems for the prime minister. Francis visited Myanmar and Bangladesh instead.

The last Indian prime minister to meet a pope was Shri Atal Bihari Vajpayee, who met John Paul II at the Vatican in 2000.