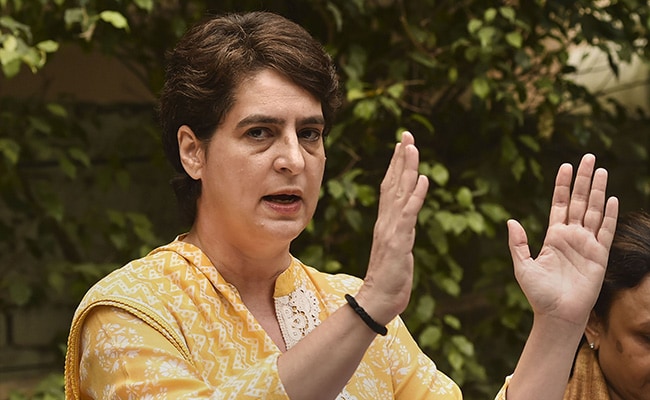 Escalating her attack on the BJP-led central government over the Lakhimpur Kheri violence where four farmers were killed, Congress leader Priyanka Gandhi Vadra on Saturday urged the Prime Minister to not share the dais with Union Minister of State for Home Affairs Ajay Mishra Teni, whose son was arrested for mowing down the farmers in the Uttar Pradesh district.

The Congress leader said that the Prime Minister sharing dais with Mr Teni would be an insult to over 700 farmers who died during the farmers’ protest.

Ms Vadra’s statement came a day after the Prime Minister announced the repealing of the three farm laws, and also ahead of a meeting of PM Modi with DGPs, IGPs of all the states/UTs, and heads of Central Armed Police Forces and Central Police Organisations.

Union Home Minister Amit Shah and MoS Home Affairs Ajay Mishra Teni, along with the Prime Minister, were scheduled to attend the meeting in Lucknow at the police headquarters.

Reading out her letter written to the Prime Minister at a press conference here today, she said, “You may be aware that the main accused, Ashish Mishra, of the Lakhimpur Kheri violence is the son of a minister in your cabinet. Since the beginning of the incident, the UP government has attempted to suppress the voice of justice. The Supreme Court had observed the UP government is trying to protect a special accused in the case.”

Stating that the family members of the farmers who were killed in the Lakhimpur Kheri violence are in ”intolerable pain” and are demanding justice, the Congress leader said, “I met the family members of slain farmers, who died in the Lakhimpur Kheri incident. They do not have any hope of getting justice if the MoS Home Affairs, Ajay Mishra, continue to remain on the post.”

Ms Vadra stated that it is the responsibility of the Prime Minister of the country to deliver justice to the people.

The Congress leader said, “Your cabinet minister Amit Shah and UP CM Yogi Adityanath share dais with the same minister. You are the Prime Minister of this country and it is your responsibility to deliver justice to the people of this country and also to the farmers.”

“On Friday while addressing the nation, you said that in the national and the farmers’ interests, the government has taken an unprecedented decision to repeal the three farm laws. You said that you have clear intentions towards farmers. If these are true, then giving justice to the victims of Lakhimpur Kheri should be your main responsibility,” she added.

“But if continue to share the dais with Ajay Mishra Teni, then there will be a clear message from you that you are standing with the people who are protecting the criminals. If you participate, then it will be an insult to over 700 farmers who died during the anti-farm laws protest,” said Priyanka Gandhi Vadra in her letter to PM Modi.

The Congress leader also demanded the immediate removal of Mr Teni from the Union Cabinet.

She said, “If you care for the farmers, then do not share the dais with the MoS Home Affairs and remove him from the post immediately.”

Ms Vadra also urged the PM to take back cases registered against the farmers and also provide financial assistance to the kin of the farmers who died during the farmers’ protests.