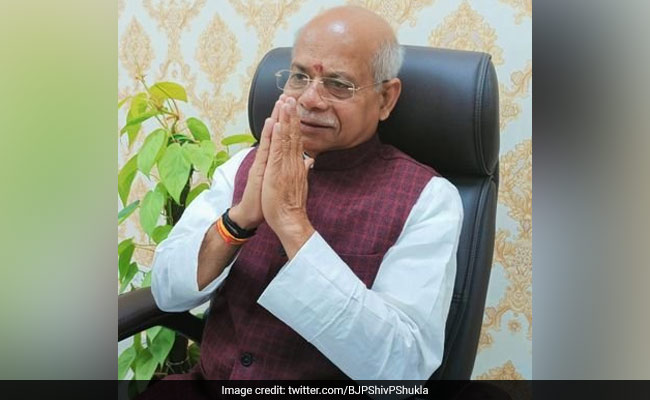 A BJP MP today compared the Opposition members protesting in Rajya Sabha to “Omicron”, accusing them of being a threat to democracy. He asked them to take the “Modi vaccine” to protect themselves from the new coronavirus variant. The opposition had earlier dubbed the Covid vaccines as “Modi vaccine” or “BJP vaccine”.

Participating in a short discussion on the situation arising out of the Omicron variant in the Upper House, BJP MP Shiv Pratap Shukla alleged that the Opposition members were running away from debates as they did not want to recognise the efforts of the government in controlling the spread of the virus.

“We all are discussing Omicron and Omicron is standing right before us,” Mr Shukla said, pointing towards the Opposition members.

“I feel that there cannot be a bigger Omicron than this, which is not allowing Parliament to function. That is why there is a danger to democracy in Parliament because of these Omicrons. These Omicrons are not becoming silent even when the Chair is making efforts,” he said, once again pointing at the protesting Opposition MPs.

The Opposition MPs objected to his remarks, with Manoj Kumar Jha of the RJD saying he has no right to speak so.

The whole world is in the grip of the virus since 2020 and when the entire world is fighting against Covid, two vaccines were developed in India and a majority of the population has been administered with these vaccines, Mr Shukla said.

“Some people used to say these are ‘Modi vaccines’ or ‘BJP vaccines’. But they, too, have taken these vaccines to save their lives,” he said.

The WHO has expressed concerns over the new variant. It is very important to be cautious against this virus, the BJP MP added.

“But what should we do about this new virus, which instead of sitting on its seat has come into the Well,” he said, pointing towards the Opposition.

The government is taking caution to ensure that there are no casualties and has already issued guidelines to tackle the Omicron variant, he added.

The BJP member said the Opposition does not want to discuss the matter and they are running away from a discussion because they want to disturb the House and want to negate all efforts made by the government to control the spread of the Omicron variant.

Objecting to his remarks, Manoj Jha said, “Our senior member from BJP, while speaking on the debate, called all of us (Opposition) as Omicron. Is it right to use such language? Such terminology angers us,” he said, adding, “We all should collectively take back the suspension and the dignity of opposition should be restored.”

The Opposition has been protesting the suspension of 12 of its members in the Rajya Sabha.