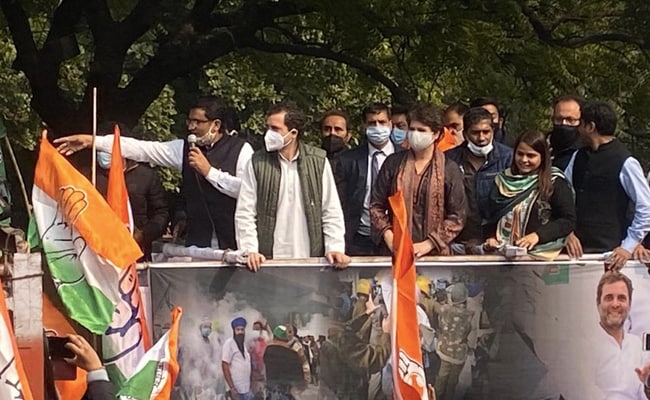 Congress MP Rahul Gandhi will lead a footmarch this morning against the government and the rising inflation in Uttar Pradesh’s Amethi, his former Lok Sabha constituency.  Priyanka Gandhi Vadra, his sister and the party’s UP in-charge, will also be part of this padyatra.

The six-km foot march comes just a week after the Gandhis and other top Congress leaders held a huge rally in Rajasthan against the government.

In an all-out attack on the centre, Mr Gandhi, 51, had lashed out at the ruling BJP from the stage: “Who is a Hindu? Someone who respects every religion and is scared of nobody. Those in power are false Hindus… India is experiencing a Hindutva-vadi raj, not Hindu raj. We want to remove these Hindutva-vadis and bring in a Hindu raj.” Congress chief Sonia Gandhi and Rajasthan Chief Minister Ashok Gehlot were present on the stage.

The Congress is using all resources at hand and strategising hard ahead of the assembly elections in five states next year after facing multiple poll setbacks since 2014.

Today, Mr Gandhi is visiting Amethi for the second time after his 2019 Lok Sabha election loss by over 50,000 votes to the BJP’s Smriti Irani. The Congress lost Amethi – traditionally a stronghold of the Gandhis – to the BJP in a huge blow.

The Congress says Mr Gandhi’s presence in UP will bolster their campaign for the UP state election where the party is fighting solo on the plan of women empowerment, having already committed to 40 percent tickets for women.

Prime Minister Narendra Modi is also in UP’s Shahjhanapur today – his third visit in a week – to lay the foundation stone of the 594 km long Ganga expressway that will connect the western part of the state to Prayagraj in east UP.

The Prime Minister’s frequent visits to the state are indicative of the BJP’s seriousness to retain power for a second straight term.