Depreciation in rupee is a double-edged sword for the Reserve Bank of India.

New Delhi: The Indian rupee is set to end a tumultuous year as Asia’s worst-performing currency with foreign funds fleeing the nation’s stocks. The currency declined 2.2% this quarter as global funds pulled $4 billion of capital out of the country’s stock market, the most among regional markets where data is available.

Foreigners sold Indian stocks as Goldman Sachs Group Inc. and Nomura Holdings Inc. recently lowered their outlook for equities, citing lofty valuations, at a time when concerns about the omicron virus variant are roiling the global markets. Record-high trade deficit and the central bank’s policy divergence with the Federal Reserve have also impinged on the rupee’s carry appeal.

“The monetary policy divergence and widening current account gap have set depreciation in the rupee in the near term,” said B. Prasanna, head of global markets, sales, trading and research at ICICI Bank Ltd in Mumbai. 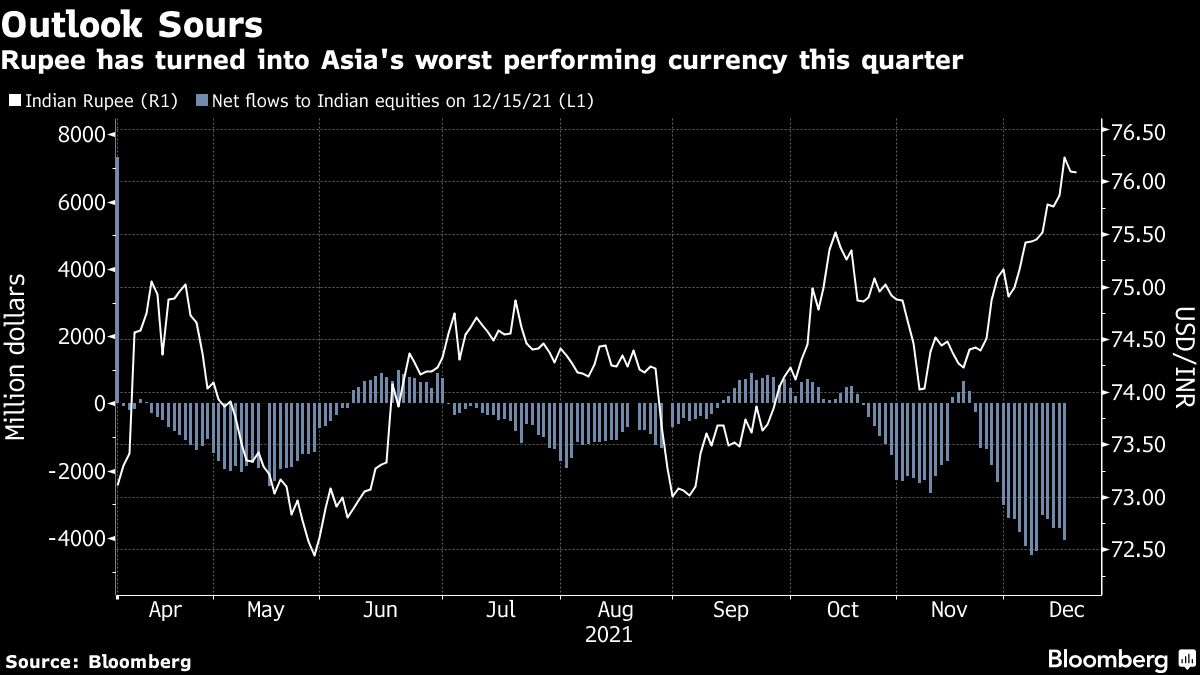 Depreciation in rupee is a double-edged sword for the Reserve Bank of India. While a weaker currency may support exports amid a nascent economic recovery from the pandemic, it also poses risk of imported inflation, and may make it difficult for the central bank to maintain interest rates at a record low for longer.

QuantArt Market Solutions expects the rupee to decline to 78 per dollar by end-March, falling past the previous record low of 76.9088 reached in April 2020, while a Bloomberg survey of traders and analysts forecast the rupee at 76.50. The rupee is set to drop about 4% this year in a fourth straight year of losses.

Stocks on The Edge

Foreign exodus from stocks have led to the benchmark S&P BSE Sensex Index falling by about 10% below an all-time high touched in October. Despite that, the one-year forward price-to-earnings ratio for the Sensex is near 21, compared to 12 for MSCI’s Emerging Markets Index, meaning there’s room for the equities to fall even further. Bonds have seen $587 million of outflows this quarter.

Bearish rupee calls are rising as India’s trade deficit widened to an all-time high of about $23 billion in November amid higher imports. The ample liquidity in the banking system, partly created by the RBI’s dollar purchases, may make it difficult for the central bank to intervene to the same extent in 2022 to curb rupee’s losses, according to Goldman Sachs.

Still, not all are pessimistic. A likely reversal in foreign inflows in the coming quarter on account of share sales in companies including Life Insurance Corp. of India, billed as India’s biggest initial public offer, may cushion the rupee, according to UBS AG.

The rupee gained 0.2% on Monday to 75.9163 per dollar amid speculation that the central bank intervened to curb the rupee’s losses.

Beyond the temporary spike in dollar/rupee expected in the next four-to-six weeks, “we see the one-off flows and supportive 1Q current-account seasonality to come at play,” said Rohit Arora, emerging market Asia strategist at UBS. “As long as oil remains tamed, rupee should end the fiscal year below current levels possibly in 74-75 range.”