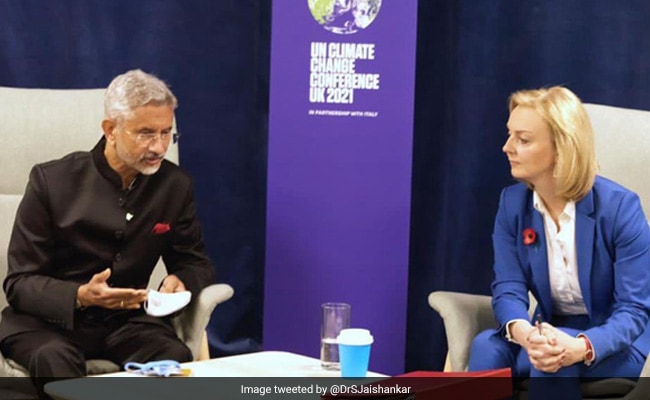 Mr Jaishankar said that his conversation with Truss will keep the momentum of the Roadmap 2030 strong.

The Roadmap 2030 for India-UK future relations was launched during a virtual summit between the two countries in May.

“Nice to catch up with UK Foreign [email protected] Our regular conversations keep the momentum of the Roadmap 2030 strong. Also exchanged notes on #COP26 developments,” Mr Jaishankar said in a tweet.

Nice to catch up with UK Foreign Secretary @trussliz.

The Roadmap 2030 vision is for revitalised and dynamic connections between “our people, re-energised trade, investment and technological collaboration that improves the lives and livelihoods of our citizens, enhanced defence and security cooperation,” according to the Ministry of External Affairs.

Jaishankar is in Glasgow with Prime Minister Narendra Modi. The leaders have participated in the COP26 here and held several meetings here. The COP26 is taking place under the Presidency of the UK partnering with Italy in Glasgow.