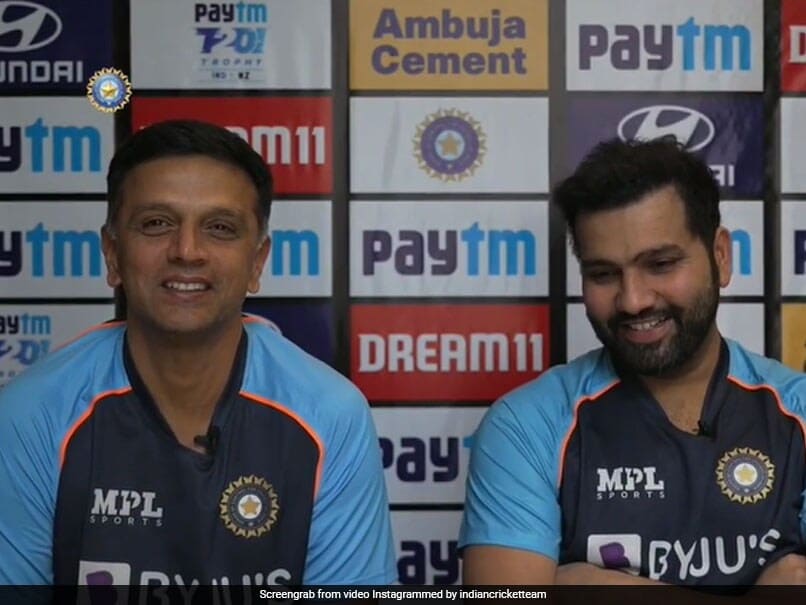 Sachin Tendulkar has weighed in on India’s World Cup chances under Rohit and Dravid.© Twitter

Virat Kohli’s era as India’s T20I captain came to an end on a disappointing note as the team crashed out of the T20 World Cup last year in the Super 12 stage. Ahead of the tournament in the UAE last year, Kohli had said that he would relinquish the T20I captaincy after the end of the T20 World Cup. With Kohli stepping down, the Board of Control for Cricket in India (BCCI) named Rohit Sharma as full-time white-ball captain while announcing India’s squad for the recently-concluded tour of South Africa.

With Australia set to host the next T20 World Cup later this year, legendary India batter Sachin Tendulkar said that he would love to see the team lift yet another World Cup title.

“In the month of April this year, we’ll complete 11 years (of World Cup win). That’s a long wait. Everyone including me would love to see that trophy in BCCI’s cabinet. This is one trophy which all the cricketers play for. It doesn’t get any bigger than that… be it a shorter or longer format. World Cup is something special and that’s what I feel,” Tendulkar said on ‘Backstage with Boria’ YouTube show.

Labelling them as a “fantastic pair”, Tendulkar also praised Rohit and head coach Rahul Dravid, saying that both stalwarts have played enough cricket to overcome all “ups and downs”.

“Rohit & Rahul is a fantastic pair. I know that guys would give their best shot and prepare to the best of their ability. You have so many people backing you. It’s all about having that support at the right time. Of course, everyone has played enough cricket. Rahul has played enough cricket to understand there are gonna be ups and downs along the way. Not to lose hope is the only thing. Keep trying and we will keep moving forward,” he added.

India will face Pakistan in their opening match of the T20 World later this year, which be a repeat of last year’s Super 12 stage match.

Pakistan had won the game comprehensively by 10 wickets and India will hope to make amends when the two sides meet yet again on October 23 at the Melbourne Cricket Ground (MCG).