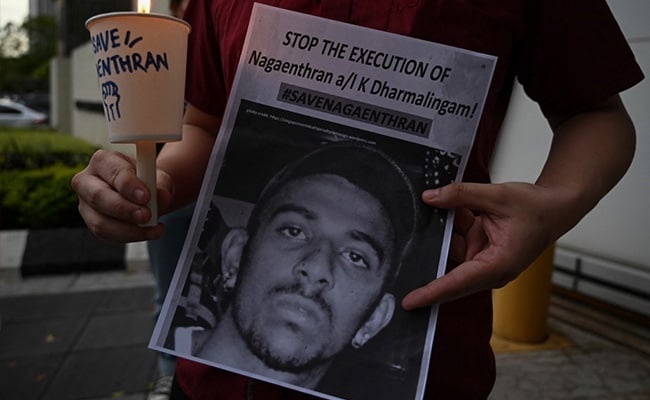 Nagaenthran K Dharmalingam was sentenced to death in 2010 for importing 42.7 grammes of heroin.

The sister of a Malaysian man facing imminent execution despite concerns he is mentally disabled has pleaded with Singapore to give him a “second chance”.

Nagaenthran K. Dharmalingam, sentenced to death in 2010 for trafficking a small amount of heroin into Singapore, was originally set to be hanged last week after losing a series of appeals.

The execution in the city-state, which has some of the world’s toughest drugs laws, was postponed after the 33-year-old contracted the coronavirus, but campaigners fear the delay will be short.

His family are not giving up, however, with his sister Sarmila Dharmalingam urging the city-state to “give him a second chance”.

“We hope the Singapore government will spare his life,” the 35-year-old told AFP in an interview Sunday from the family home in Tanjung Rambutan, in the northern Malaysian state of Perak.

“He is suffering from an intellectual disability.”

Nagaenthran’s case has sparked a storm of criticism, with the European Union and United Nations rights experts speaking out against it, and a clemency petition getting around 85,000 signatures.

A last-ditch court challenge is being mounted and while chances of success look slim, Sarmila and her family are holding out hope.

“All our family members are holding prayers for his life to be spared,” said the housewife, who is ethnic Indian and a member of the Hindu minority in mostly Muslim Malaysia.

“I believe in miracles… With God’s grace, a miracle will happen.”

Nagaenthran was arrested aged 21 as he tried to enter Singapore from neighbouring Malaysia with a bundle of heroin weighing about 43 grams — equivalent to about three tablespoons — strapped to his thigh.

Campaigners say he has an IQ of just 69, a level recognised as an intellectual disability, was coerced into transporting the drugs, and was struggling with an alcohol problem at the time.

But Singapore, which insists the death penalty is an effective deterrent against crime, has shown little sign of heeding calls for clemency.

The home affairs ministry said earlier this month that psychiatrists had stated during previous court proceedings that Nagaenthran was not intellectually disabled.

Legal rulings also concluded that he “clearly understood the nature of his acts”, which were aimed at paying off debts, it said in a statement.

A written appeal from Malaysia’s Prime Minister Ismail Sabri Yaakob was also brushed off, with his Singapore counterpart Lee Hsien Loong responding that Nagaenthran had been given “full due process under the law”.

‘He wants to come home’

Sarmila — one of Nagaenthran’s three siblings — recalled the shock when her family received a letter from Singapore authorities on October 26 informing them her brother would be hanged on November 10.

Preparations for the festival of Diwali were halted so the family could figure out how his mother, who works as a cleaner, and other relatives could travel to Singapore to see him before the execution.

Naganethran’s eldest sister, Sarmila struggles to accept her brother is a convicted drug smuggler and still has fond memories of playing childhood games with him.

He was a “lovable person. He was very caring”, she said.

During more than a decade behind bars, Nagaenthran developed a passion for arts and crafts, making cards for his family back home to mark occasions such as Mother’s Day.

His sister believes he was coerced into drug smuggling, as he was “timid and easily influenced by others”.

If it goes ahead, it would be the first hanging in Singapore since 2019.

During recent prison visits, relatives have found Nagaenthran “erratic and depressed”, according to Sarmila.

“He knows he is going to be hanged but… he says he wants to come home and take care of his mother,” she said.

Fighting back tears as she clutched a photo of Nagaenthran as a child, she pleaded: “I want my brother to come home.”