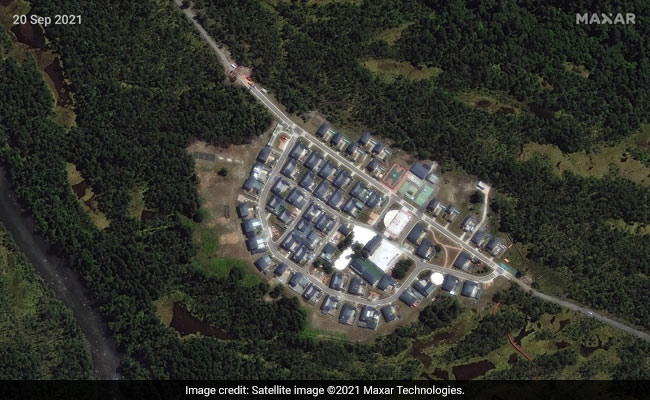 New satellite images accessed by NDTV show that China has constructed a second enclave or cluster of at least 60 buildings in Arunachal Pradesh.

The new enclave did not exist in 2019 according to the satellite images; a year later, it can be seen. It lies 93 km east of a China-constructed village in Arunachal Pradesh, a big encroachment first reported by NDTV in January and which was confirmed by a Pentagon report just days ago. India reacted sharply to that report, which corroborated NDTV’s exclusive story, stating ”China has undertaken construction activities in the past several years along the border areas, including in the areas that it has illegally occupied over the decades. India has neither accepted such illegal occupation of our territory, nor has it accepted the unjustified Chinese claims.” 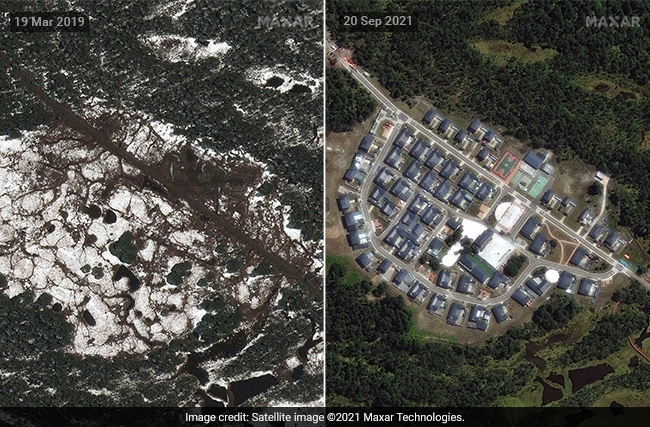 The second enclave lies approximately 6 kilometres within India in the region between the Line of Actual Control (LAC) and the International Boundary. India has always claimed this as its own territory. The images do not offer any clarity on whether the enclave is occupied.

When asked for comment by NDTV, the Indian Army said, ”The location corresponding to the coordinates mentioned in your query lies to the North of LAC (Line of Actual Control) in Chinese territory.” This statement does not refute the fact that construction of this enclave seems to lie between the Line of Actual Control and the International Boundary, in other words, within Indian territory illegally occupied by China. NDTV asked the army about this point; a senior Army officer said that there is no change in their response: ”The area indicated is North of LAC.” So again, there is no rejection of the new enclave being constructed on Indian turf. 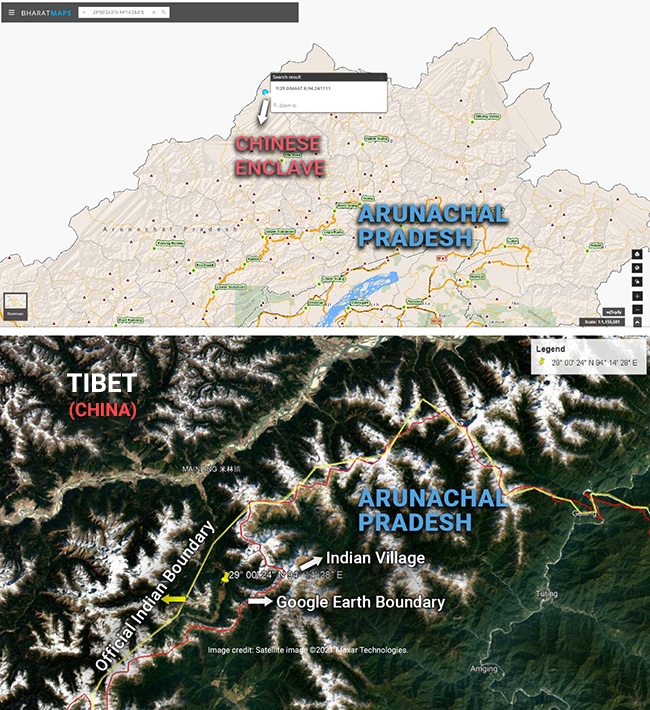 Location of Chinese enclave as per Bharat Maps (above), Survey of India (below) – Indian boundary marking. Click here for high res image

​NDTV also sought comments this week via written questionnaires from top government officials in Arunachal: the Chief Minister, Deputy Chief Minister and Home Minister. No response has been received at the time of publishing this report which will be updated with reactions if and when they are issued.

It is important to note that the government’s statement last week – in response to the Pentagon report – not just acknowledged but emphasized that China has tried to appropriate, through exactly this sort of construction, parts of Indian territory.

In a statement in Parliament a year ago, a BJP MP from Arunachal Pradesh had commented on the encroachment by China. Tapir Gao said in the Lok Sabha: “I want to tell media houses in the country that there is no coverage of the extent to which China has captured Indian Territory (in Arunachal Pradesh).” Referring to the India-China standoff in Doklam in 2017 which lasted several months, Mr Gao warned: “If there is another Doklam, it will be in Arunachal Pradesh.”

The new enclave, the second of its kind, is established through images from two of the world’s premier satellite imagery providers, Maxar Technologies and Planet Labs. These images of the Shi-Yomi district of Arunachal show not just dozens of buildings, including a structure with a flag of China painted on a roof top, large enough to be spotted by imaging satellites. (see photo below). The giant flag appears to assert a territorial claim to the area. 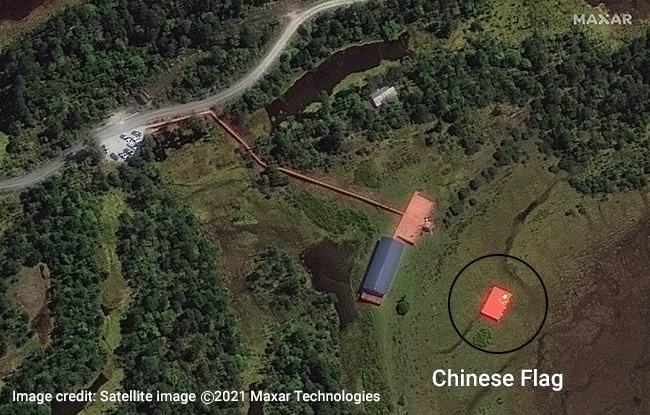 A large flag of China is painted atop a structure in the Chinese enclave. Click here for high res image

The exact location of the new enclave is clearly indicated on Bharatmaps, a Government of India online map service. A digital map of India, detailed carefully by the Surveyor General of India, also confirms the location is within India.

“Based on GIS [Geographic Information System] data obtained from the official Survey of India website, the location of this village indeed falls within Indian territorial claims,” said Sim Tack, Chief Military Analyst at the Europe based Force Analysis, which provides data and analysis on armed conflicts and defense policy. “This appears to be a location where local geography makes access to this valley much more conducive from the Chinese side than from the Indian side. The valley connects directly to nearby Chinese communities on the Yarlung Tsangpo [Brahmaputra] River, while it is separated by steep mountain ranges from Indian controlled territory.”

Indian experts confirm this. ”An examination of Bharatmaps shows that the point is well within 7 kilometres of the International Boundary, as defined by the Survey General of India under whose jurisdiction the boundaries of India are depicted in all official maps,” says Arup Dasgupta, who has decades of experience in satellite-imaging technology.

A photograph of this enclave was published in July this year by the Xinhua News Agency, the state-run press agency of the People’s Republic of China. That is when China’s President Xi Xinping visited the same region and inspected a new, strategically-important railway line along the Arunachal border. The newly-constructed Chinese enclave lies approximately 33 kilometres south of the airport used by Xi for his visit to this area. 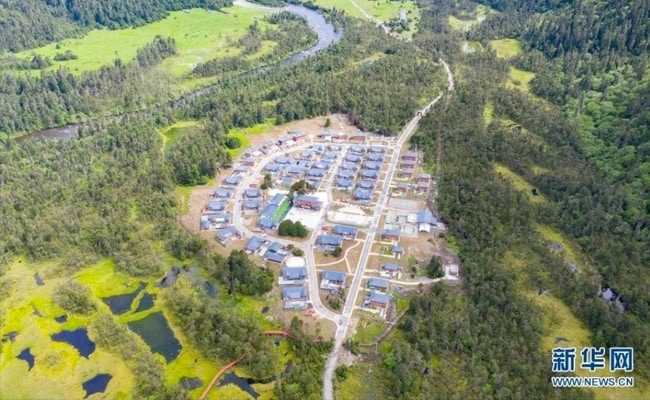 ”The new village shows how, bite by bite, China is eating away at India’s Himalayan borderlands. The pictures of the sparkling new village vividly show its artificial nature,” says strategic analyst Brahma Chellaney, one of India’s leading strategic analysts on China. ”China has even coined a Chinese name for the village, located in an area where traditionally no one spoke Chinese,” he says. 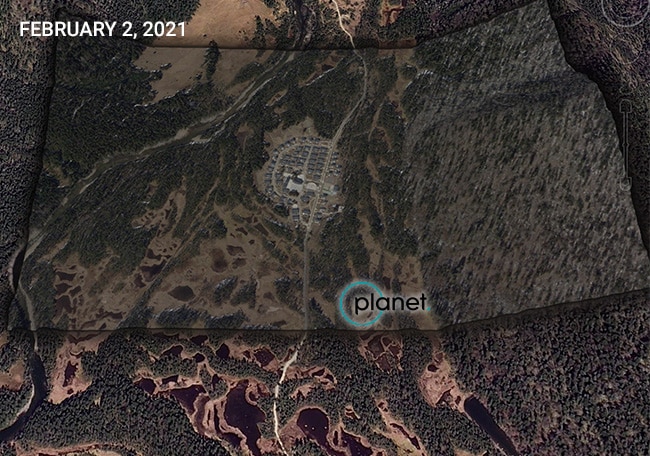 China’s continued construction activity along its frontier with India comes at a time when it has introduced a new Land Borders Law which pledges state support for establishing civilian settlements in border areas. Building border villages is seen to be a key part of China’s strategy of attempting to make its territorial claims permanent since international law recognises civilian settlements as evidence of a nation’s effective control over an area.