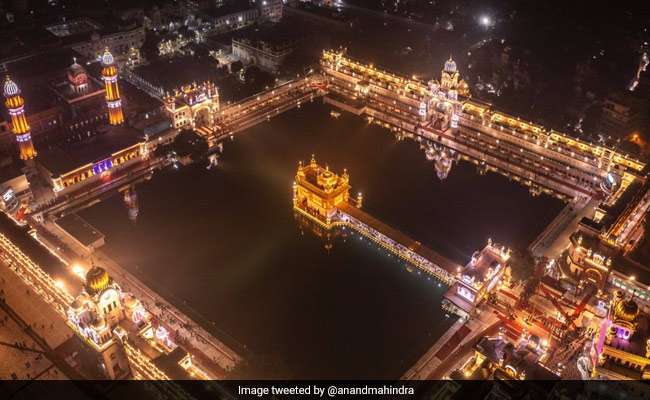 On the occasion of Gurpurab, families prayed and lit candles at the Golden Temple

Industrialist Anand Mahindra today shared a magnificent aerial shot of the Golden Temple in Amritsar to wish people on the occasion of Gurpurab.

The photograph shared by Mr Mahindra in a Twitter post captures a breathtaking view of the Golden Temple, the Akal Takht and the perimeters flanking the Sarovar at the centre, all lit up beautifully to mark the occasion.

“Happy Gurpurab to all. Enjoy this photo by @ompsyram which captures the serenity of Sri Harmandir Sahib.. #GuruNanakJayanti,” Mr Mahindra said in the post.

Happy Gurpurab to all. Enjoy this photo by @ompsyram which captures the serenity of Sri Harmandir Sahib.. #GuruNanakJayantipic.twitter.com/MgPWWxq436

In the comments sections, many Twitter users wished Mr Mahindra on the occasion. Some of them also shared pictures of Golden Temple clicked by them.

On the occasion of Gurpurab, the birth anniversary of Sikhism founder Guru Nanak Dev, families prayed and lit candles at the Golden Temple. Devotees also took a dip in the Sarovar on the occasion.

This is the 552nd birth anniversary of Guru Nanak. Guru Nanak was born on April 15, 1469 at Rai Bhoi Ki Talwandi near Lahore, which is in Sheikhupura district of Pakistan now.

Golden Temple is illuminated every year to mark Gurpurab. While the majestic structure glowed at the centre of Sarovar, colourful lights were used to light up the other buildings on the premises. Visuals shared on social media also showed fireworks at the Golden Temple to mark the occasion.