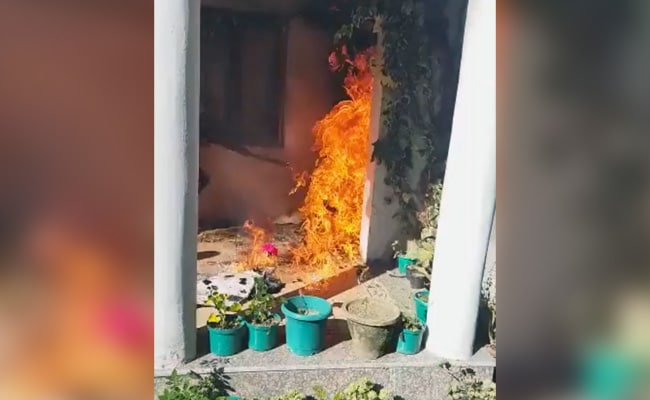 Salman Khurshid’s house in Satkol, about 15 kilometres from Nainital, was vandalised on Monday (File)

Some of the suspects who attacked senior Congress leader Salman Khurshid’s house in this district of Uttarakhand were identified on Wednesday, following which raids were intensified to apprehend them, a senior police officer said.

Eight shells and a live cartridge of 32 bore gun, which is used primarily to scare away animals, were also recovered from the premises by a forensic team, Deputy Inspector General of Police (DIG) Nilesh Anand Bharne said.

CCTV footage recovered from the spot led to the identification of some of the attackers and we have intensified our raids to nab them, he said.

No arrests have been made yet, he added.

Mr Khurshid’s house in Satkol, about 15 kilometres from Nainital, was vandalised on Monday amid the ongoing controversy over his book “Sunrise Over Ayodhaya: Nationhood In Our Times” in which he draws a comparison between Hindutva and terror outfits like ISIS.

Shouting pro-Hindutva slogans, the attackers burnt an effigy of the Congress leader outside his house under the Bhowali police station besides damaging some glass doors and setting one wooden door on fire of the structure.

The family of caretaker Sunder Lal was also threatened. Later, an FIR was registered against one named and 20 unidentified people on the basis of a complaint by Mr Lal.