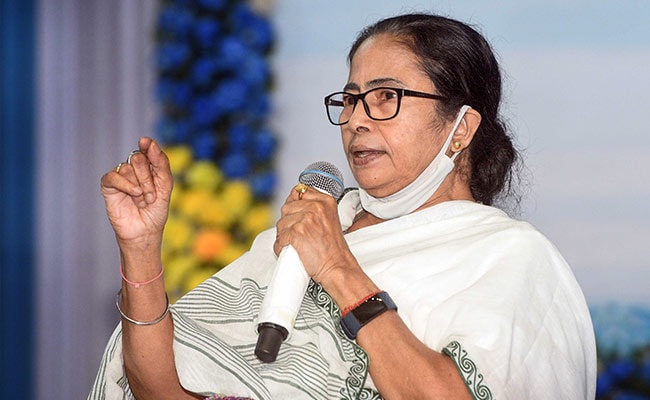 “Some people had spread lies against us,” Mamata Banerjee said.

A day after UNESCO accorded a heritage tag to Durga puja in Kolkata, West Bengal Chief Minister Mamata Banerjee on Thursday, in a dig at the opposition BJP, said those who had accused her dispensation of causing hindrance during the observation of the festival should hang their heads in shame.

During the assembly polls, the saffron party had alleged that the TMC practices “appeasement politics” and festivals such as Durga puja have suffered because of that.

“Some people had spread lies against us. They said that we don’t allow Durga Puja celebrations in the state. Today, their falsehood stands exposed. They should be ashamed of themselves. Today, I am proud and honoured for what we have achieved (UNESCO heritage status).

“What I achieved yesterday, I am pleased. I have been trying for this for a long time,” she said while addressing a Kolkata Municipal Corporation (KMC) poll rally in Bagha Jatin area.

The UNESCO on Wednesday announced that Durga Puja in Kolkata has just been added to its list of ‘Intangible Cultural Heritage of Humanity”.

“I had vowed to make Bengal the number one state, and I have kept my promise. They (BJP) had abused me, but they can’t abuse UNESCO. Let them go to UNESCO and abuse it for giving us this honour if they have the guts to do so. In next year’s Durga Puja, we will celebrate this achievement. We thank UNESCO and United Nations for this honour,” she said while addressing another rally at Behala.

“We have not forgotten how the TMC government twice tried to stop Durga Puja immersion on Dashami as the dates of Muharram clashed with it. It is a fact,” Mr Ghosh said.

BJP state president Sukanta Majumdar said it is due to the initiative by the union government that this honour was achieved.

Referring to the Lakhimpur Kheri incident during a farmers’ protest in Uttar Pradesh where eight people, including four protesting farmers, died after being mowed down by a vehicle allegedly belonging to a Union minister’s son, Banerjee said she does not believe in “killing farmers by crushing them under the wheels”.

“The BJP had planned the Lakhimpur Kheri incident that claimed so many lives but while conducting protest over Singur issue, I had stopped a speeding truck otherwise it would have crushed several TMC leaders and supporters,” she said Continuing her tirade against the BJP, Ms Banerjee accused the Central government of not providing adequate funds to the state for restoration and rehabilitation of the city and the coastal part after it was ravaged by Cyclone Amphan last year.

The Chief Minister said her dream project of linking the entire city through Metro Rail services could not see the light of the day as the Centre has slashed funding for the projects.

“When I was the Railway minister, I had sanctioned the funds. But after that (when TMC left the UPA-2 government) everything is moving at a snail’s pace,” she said.

Reaching out to the voters in the refugee colonies of the city, she said all such colonies in the city and the outskirts would be regularised, and legal land rights will be provided to them.

“I have also instructed the state police department not to evict refugees even from the central government-owned land,” Ms Banerjee said.

The Chief Minister, while speaking on her government’s vision in her third tenure, said, “I am working towards bringing industry to the state so that jobs can be generated. That’s my aim, and I will achieve it,” she said.

She said her government is trying to set up a one-stop online mechanism for clearing industries and building approvals easier, and making the system corruption-free.

Giving a call for a “corruption-free” civic body, the TMC boss asked the party candidates in the KMC polls to work for the people and ensure that their grievances related to civic issues are addressed at the earliest.

Taking a dig at opposition parties for their comments against her beautification drive of the city, Ms Banerjee said she had faced a lot of criticism but has achieved her goal of “beautification of Kolkata”.

“When we started painting the city and its buildings in white and blue, many people criticised us. But I have seen buildings in white and blue colour along the thoroughfares in Mumbai, Goa and Karnataka. Many people feel jealous after seeing Kolkata today. Blue and white is not the colour of my party. Blue is the colour of the sky. There is no limit to the sky,” she said while addressing another rally at the Kalighat area.

Ms Banerjee said grievance cells would be set up in all the wards to expedite civic-related issues.

The Chief Minister said her government will provide drinking water through pipelines by 2024.

“Our government doesn’t charge water tax. The central government had told us that the World Bank won’t give funds if tax is not charged on water, but still, we refrained from levying water tax. By 2024, we will provide piped drinking water across the state,” she said.