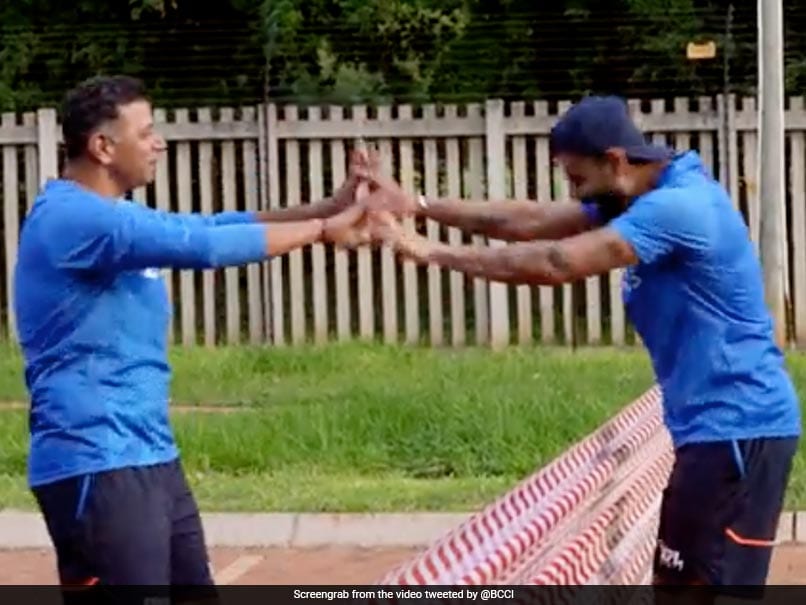 Rahul Dravid and Virat Kohli enjoyed their time together while playing “footvolley.”© Twitter

Team India enjoyed a fun session as they mixed their routine with light activities ahead of a three-match Test series beginning December 26 in Centurion. In a video posted by the Indian cricket team’s Twitter handle, members of Team India, including captain Virat Kohli, head coach Rahul Dravid, wicketkeeper batter Rishabh Pant, pacer Ishant Sharma and others featured prominently while playing “footvolley” and some light workout. Dravid also played “footvolley” and showed his competitive side.

The caption of the video read:

“How did #TeamIndia recharge their batteries ahead of their first training session in Jo’Burg?. On your marks, get set & Footvolley!. #SAvIND.”

How did #TeamIndia recharge their batteries ahead of their first training session in Jo’Burg?

With the ongoing captaincy saga grabbing headlines ahead of the all-important South Africa tour, the fun session was a great way to relax for Team India members.

All the controversy after Kohli’s fiery pre-tour press conference seems to be in a thing of the past now as the Test captain was seen smiling and laughing while enjoying the game with his teammates and support staff members.

After a hard quarantine, the Indian team is scheduled to get to serious training before preparing themselves for the Boxing Day Test in Centurion.

Johannesburg will host the second Test from January 3 to 7, 2022 while the third and final match of the Test series will be played from January 11 to 15 in Cape Town.