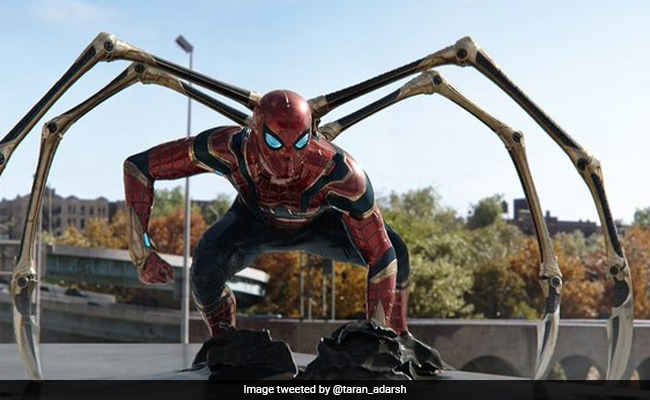 Spider-Man: No Way Home Review: A still from the film. (Image courtesy: taran_adarsh )

If you are unconditionally into superhero movies and instinctively get into the swing of things as Spider-Man slings his way around, there is no way you cannot relate to the action-packed and emotionally engaging concluding instalment of Jon Watts’ Spider-Man trilogy. Spider-Man: No Way Home is never at a loss for what works.

However, even if your acquaintance with the world of the web-slinger and his ilk is only casual, Spider-Man: No Way Home, scripted by Chris McKenna and Erik Sommers, is an experience to savour, especially if you are watching it in the company of cheering, exulting and howling fans responding to every surprise and every sleight that the film has in store for the audience.

Humour, heart, history and heft are harmoniously blended together to drive Spider-Man: No Way Home towards the goal that it has set for itself: to be the most complete and most thoroughly entertaining superhero film from the Marvel Cinematic Universe. It gets home with an effort to spare. It has two post-credits sequences that promise further forays into the multiverse. If this is anything of a long-term yardstick, we will look forward to what lies ahead.

Spider-Man: No Way Home begins where the previous instalment ended. The shield of anonymity around Peter Parker’s (Tom Holland) web-slinging adventures are torn off. He is blamed for the death of Mysterio. The whole world is now in the know of who Spider-Man is.

With Spider-Man’s secret identity outed, New York City and the world, egged on by shrill newscasts on The Daily Bugle, goes into a tizzy and the population is sharply divided between supporters and haters. The people closest to him – his aunt May (Marisa Tomei), classmate and girlfriend MJ (Zendaya) and best pal Ned (Jack Batalon) – are the worst affected by the turn of events. They are charged with aiding and abating Peter’s chaos-generating vigilantism.

In desperation, Peter requests his Avengers ally Dr Stephen Strange (Benedict Cumberbatch) to cast a magic spell that will make people forget Spider-Man’s antecedents. Dr Strange’s agrees to help him out but their plan does not go the way it is intended to. The spell aimed at restoring Spider-Man’s ‘secret’, breaks open the multiverse, bringing five supervillains back into the present universe from all the other universes in which Spider-Man fought and vanquished them.

This isn’t only about a 17-year-old boy hoping to be accepted into the college of his dream along with his two best friends. It is, more importantly, about a kid learning the hard way to shoulder the responsibility of being a defender of all that is positive in this world. He deals with anguish and confusion as the revelation of his identity wreaks havoc all around him. But even with his options drying up quickly, Peter must continue to fight for what he stands for. The dangers inherent in that course of action are grave and he carries on regardless.

The bursts of jaw-dropping, VFX-driven action sequences are punctuated with ruminative moments that are utilized for the development of the characters so that each of them has a rounded feel. Aunt May, referring to one of the scientists from another universe who has strayed into hers, says: He is lost, but not in the cosmos but in his head. Yes, that is where Spider-Man: No Way Home is at its best. It explores the notions of a multiverse and alternate realities, taking the aid of all the flights of fancy that the exercise entails. Happily, the film never loses touch with its soul.

Loss, grief, erasure of memory, remembrance and the purpose of heroism – a moral mission opposed to a pursuit of power – are delved into without slowing down the pace of the movie. Spider-Man is determined to give the antagonists a second shot at deliverance while Dr Strange advocates that they be sent back where they have come from and be allowed to meet their fates. Peter wants to cure them before sending them back to their respective universes.

The young Peter’s ingrained sense of altruism – his dying uncle Ben Parker had in an earlier film asserted, “with great power comes great responsibility”, a line repeated in this film in similarly tragic circumstances – becomes his undoing as Norman Osborn/Green Goblin (Willem Dafoe, reprising the role he played in Sam Raimi’s Spider-Man trilogy) takes advantage of it. He turns against the superhero and prevents his bid to help the other villains rid themselves of their evil strains.

Marvel superhero films have lately seen Peter drift away from his origins. In Spider-Man: No Way Home, as in the previous two films of the trilogy (Spider-Man: Homecoming and Spider-Man: Far from Home), he returns to the principles that made him a crusader against evil in the first place. It is an event-filled journey home that makes the two-and-a-half-hour film consistently exhilarating.

Benedict Cumberbatch and Willem Dafoe frequently threaten to run away with the film and leave the actor playing the protagonist a bit in the shade. It is to Tom Holland’s credit that he holds his ground with unwavering intent, articulating the inner turmoil of an ordinary teenager endowed with a gift but faced with the prospect of having it all snatched away. The competition is no less fierce from Zendaya, who carves out a young woman of substance and complexity in a truly memorable star turn.

The film springs a steady string of surprises (not the least of which pertains to the character of Peter Parker himself) that will only be considerably lessened if divulged in a review. Suffice it to say, Spider-Man: No Way Home is a terrific ride up a highway dotted with delights and landmarks, both expected and unexpected.

The fantastic and the funny, the wild and the witty, and the nostalgic and the new intermingle felicitously in Spider-Man: No Way Home to deliver a movie that is an out-and-out blockbuster and yet feels warm and intimate – not an ordinary feat.