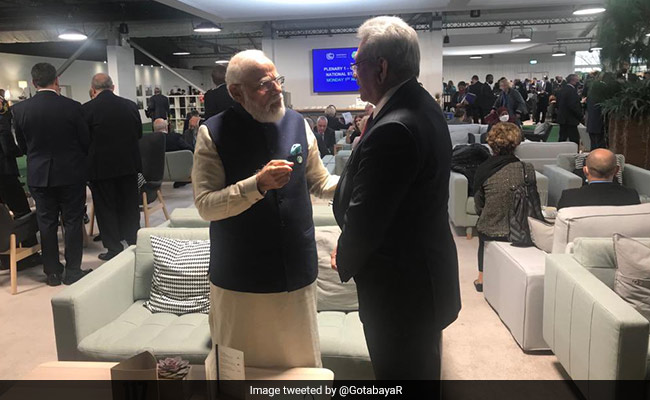 Gotabaya Rajapaksa said that it was a pleasant encounter with PM Modi.

Prime Minister Narendra Modi met Sri Lankan President Gotabaya Rajapaksa on the sidelines of the 26th session of the Conference of Parties (COP26) in Glasgow on Monday.

“Happy to have met you here in Glasgow, President @GotabayaR,” PM Modi said in a tweet on Monday.

Mr Rajapaksa said that it was a pleasant encounter with PM Modi.

“Pleasant encounter with the Indian PM @narendramodi at #COP26, in Glasgow, Scotland,” Mr Rajapaksa said in a tweet on Tuesday.

Pleasant encounter with the Indian PM @narendramodi at #COP26, in Glasgow, Scotland. ?? ?? pic.twitter.com/LtXKDbinpc

World leaders are participating in the COP26 in Glasgow. Over 100 countries expressed their commitment to working together to halt and reverse forest loss and land degradation by 2030. The countries endorsed the Glasgow Leaders” Declaration on Forests and Land Use at the COP26 summit.

COP26 is being held from October 31 to November 12 under the Presidency of the UK partnering with Italy. The high-level segment of COP-26, titled the World Leaders’ Summit (WLS), is being held from November 1-2. Heads of state/government of more than 120 countries are participating in the event.