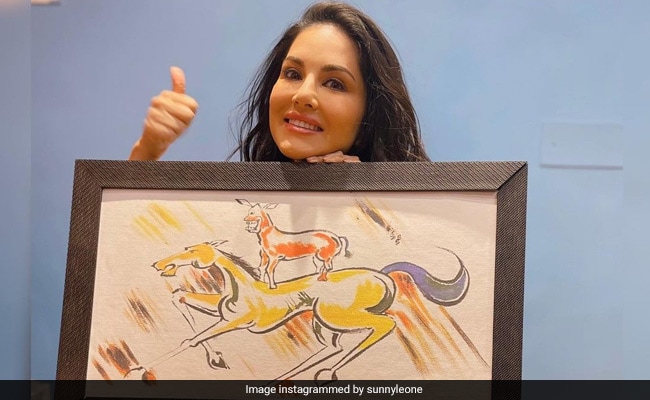 Sunny Leone always keeps us entertained with her social media posts. Sunny Leone featured in Kuch Kuch Locha Hai, Ek Paheli Leela, Jism 2, Hate Story 2 and Ragini MMS 2. On Monday, Sunny Leone shared a picture on her Instagram handle that features herself along with the portrait of a horse. The portrait is also known as the “Majnu Bhai’s Portrait” from the film Welcome which was made by Anil Kapoor known as ‘Majnu bhai’ in the film. Sharing the post, Sunny Leone wrote: “Guess the famous painter!!.” She added a laughing emoji along with hashtags like #SunnyLeone and #MajnuBhai. Sunny Leone also tagged Anil Kapoor and director Anees Bazmee in her post. Reacting to the post Anil Kapoor wrote: “Majnu Bhai’s art is world-famous in India!,” along with a laughing emoji.

Recently, Sunny Leone shared a video in which she can be seen lip-syncing to the famous song Koyel Teri Boli. Sharing the video, Sunny Leone wrote: “​Feels like Hitendra Kapopara had the infamous “Kauwa Biryani,” she also added a laughing emoji along with the hashtags like #SunnyLeone, #reelitfeelit and #reelsinstagram in her post.

Sunny Leone featured in a web series called Karenjit Kaur – The Untold Story Of Sunny Leone, in which a few segments focused on how the actress was bullied growing up. Sunny Leone made her debut in the Indian entertainment industry in 2012. She was also a part of the fifth season of Bigg Boss from where she rose to fame. Since then, she has been a part of various films and Television shows. Sunny Leone has also hosted a popular TV reality show called Splitsvilla.