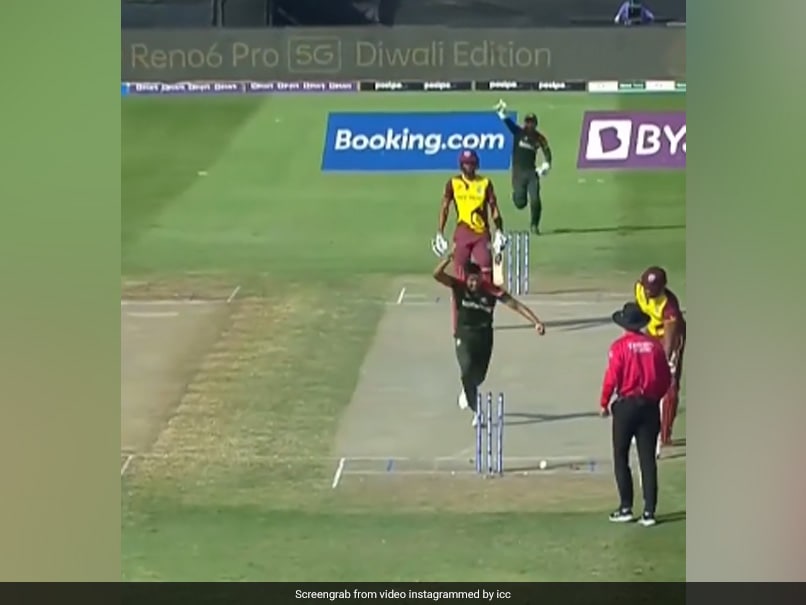 West Indies’ bid to set up a big total against Bangladesh in the ongoing Super 12 game in the T20 World Cup 2021 in Sharjah was crushed when Taskin Ahmed inflicted one of the luckiest run-outs to send all-rounder Andre Russell packing. The incident happened in the 13th over of the game when Roston Chase hit a delightful straight drive directly at the bowler, who in turn, was lucky to get the slightest of touches with his toe. The ball was deflected and hit the stumps. Russell was backing too far at the other end and couldn’t make it back in time as Bangladesh got rid of him for a duck. The all-rounder didn’t face a single legal delivery.

The International Cricket Council acknowledged the incident and shared the video with a caption:

This wicket put further brakes on the scoring rate. Chase scored 39 runs off 46 balls but it was Nicholas Pooran who gave the necessary push to the scorecard with 40 runs of just 22 balls.

Jason Holder finished the innings with 15 runs off five balls as West Indies posted 142/7 in their 20 overs.

Islam, in particular, proved exceptional as he conceded only 20 runs in his four overs.

Both teams went into the game having lost their opening two encounters of the T20 WC and a loss in this game can prove to be a final nail in the coffin as far as their semi-final hopes are concerned.